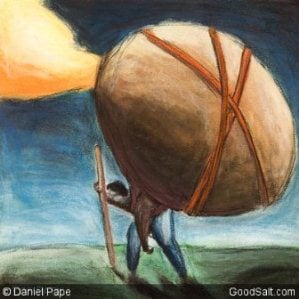 The Greek word translated “burden” in Galatians 6:5 is baros. It literally referred to a heavy weight or load that someone had to carry a long distance. Over time, however, it became a metaphor for any type of trouble or difficulty, such as the burden of a long day’s work on a hot day (Matt. 20:12). While the immediate context of Paul’s injunction to “bear one another’s burdens” certainly includes the moral lapses of the fellow believers mentioned in the preceding verse, the concept of burden bearing he has in mind is much broader. Paul’s instructions reveal several spiritual insights about the Christian life that should not be overlooked.

First, as Timothy George notes, “All Christians have burdens. Our burdens may differ in size and shape and will vary in kind depending on the providential order of our lives. For some it is the burden of temptation and the consequences of a moral lapse, as in verse 1 here. For others it may be a physical ailment, or a mental disorder, or a family crisis, or lack of employment, or demonic oppression, or a host of other things; but no Christian is exempt from burdens.”—Galatians, p. 413.

Second, God does not intend for us to bear all our burdens alone. Unfortunately, we often are far more willing to help others to carry their burdens than we are in allowing others to help us shoulder our own. Paul condemns this attitude of self-sufficiency (Gal. 6:3) as human pride, when we refuse to admit that we also have needs and weaknesses. Such pride not only robs us of the comfort of others but also prevents others from fulfilling the ministry that God has called them to perform.

Finally, God calls us to bear the burdens of others because it is through our actions that God’s comfort is made manifest. This concept is built on the fact that the church is the body of Christ. An illustration of this is in Paul’s words, “But God, who comforts the downcast, comforted us by the coming of Titus” (2 Cor. 7:6, ESV). Notice that “God’s comfort was not given to Paul through his private prayer and waiting upon the Lord, but through the companionship of a friend and through the good news which he brought.

What keeps you from seeking help—pride, shame, lack of trust, a sense of self-sufficiency? If in need, why not seek out someone whom you trust and ask this person to share your burdens?