↓
Home→Feature→Called to Be Kingdom Builders

Standing before Pilate under intense pressure, Christ stands calm and self-controlled. Unknown to the courtroom is a divine power, a focused mission and ministry they have never seen nor can they comprehend. Standing before worldly power, Jesus Christ unequivocally states to Pilate, “My kingdom is not of this world: if my kingdom were of this world, then would my servants fight, that I should not be delivered to the Jews: but now is my kingdom not from hence.” (John 18:36)

If you are a Christian, the assertion of Christ having a kingdom, thus making Him a king, is a gratifying one. But while humans are awe-struck by the lives of the powerful, wealthy, and nobility, everything about Christ was counter to human practices and human values. He appeared as the antithesis of human nobility. He was always poor, often hungry, without permanent address and disconnected from the aristocracy of His times. Yet He said He was a King.

Being not of this world, we could easily think that Jesus was speaking of His origin or heavenly home. But this does not explain why He responded to a ruler with defined authority as He did. A King is a King because he has subjects and his subjects and lineage recognize his royal title.

Not long ago Kate Middleton married royalty – Prince William, grandson of the Queen of England and heir to the throne. Marriage can do many things, but make Kate a princess, it could not. Her official royal title is Duchess of Cambridge. Marriage into a royal family changed her status in many ways, but it did not make her princess or immediate heir to the throne. Christ did not need a relationship to claim His status. His claim is without mention of lineage or kinship. Linkage with David connects Him to Israel’s monarchy, but His status and universal rank supersedes that. 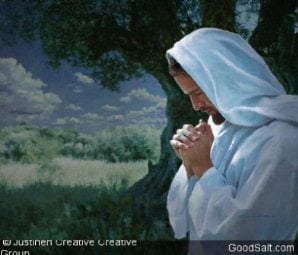 Additionally, Christ said “His servants would fight” if His kingdom were earthly. Servants are involved in a negotiated and mutually beneficially relationship. Like Abraham’s servants, Christ’s servants are of His house and are cared for by His hand. They are willingly with Him and He takes care of their needs. It is also significant that Christ, the non-violent leader, uses a term which implies conflict and struggle. Kingdom battles always result in a war to the death. Kingdom battles are for the kingdom and all it involves.

In this one statement Christ bridges what was with the not yet. God Himself came to this earth in flesh to bind the lives of creatures to their Creator. The God of the Universe wanted His creation back in fellowship with Him after they were torn from His hands after a short-sighted response to an appeal to self-exaltation.

From this pronouncement, the kingdom motif is established. To prove lineage and purpose, Christ is connected to an earthly monarch. God the Holy Spirit planted God the Son into a human being to connect mortals to God the Father in heaven.

Christ fought for His right to reign over His kingdom on His knees in submission to the will of our Heavenly Father. With holy anticipation Christ also spoke of the ‘not yet.’ Before the Jewish elders, Jesus speaks very differently of what His kingdom and authority will be. “Hereafter shall the Son of man sit on the right hand of the power of God.” (Luke 22:69).

The emphasis of the kingdom of Christ was not nor ever will be power and glory as it is pursued by humanity. His power, His majesty was attained by His victory over sin, death, and the grave. Christ’s kingdom is centered on building adherents to His cause and His mission – the eradication and final victory over sin. These followers are kingdom builders.

Are you a Kingdom builder?

Kingdom builders know that sin is the problem that ails all humanity. Kingdom builders are sold out to Christ and turned off by sin in all its forms. Kingdom builders are interested in humanity, because humanity is the focal point of the Christ’s mission and ministry. Salvation and redemption are processes of transformation. Kingdom builders know this world has nothing to offer but misery, pain, suffering, difficulty, and ultimately death. Kingdom builders know the good news of salvation on a personal basis and share their Christ, their king with everyone. “. . . the kingdom of God’s grace [that] is now being established, as day by day hearts that have been full of sin and rebellion yield to the sovereignty of His love.” (E. G. White, Thoughts from the Mount of Blessing, p. 108)

Kingdom builders live Christ’s mission, ministry, and mandates. He is King. He is the victor. By faith in Him, we go from victory to victory, overcoming as we abide in Him. “The kingdom of God comes not with outward show. It comes through the gentleness of the inspiration of His word, the fellowship of the soul with Him who is its life. The greatest manifestation of its power is seen in human nature brought to the perfection of the character of Christ.” (Ellen G. White, The Ministry of Healing, p. 36)

The kingdom of Christ is not of this world. If He is our Savior and our King, neither is this world our kingdom.