NEWSFLASH! – THIS JUST IN! 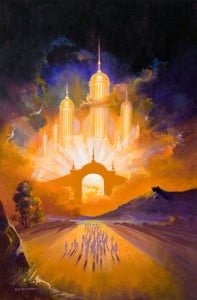 “The Christian share of the U.S. population is declining, while the number of U.S. adults who do not identify with any organized religion is growing, according to an extensive new survey by the Pew Research Center.” 1

With all of the additional outlets of evangelism spawned by the technological advancements of the last half century it appears that Christianity is declining instead of advancing, at least in the U.S. To arrest and reverse this alleged decline in numbers I have 7 simple solutions.

1) Celebrate the greatness of man rather than the humility of Christ. Everyone loves to hear that they are great or at the least have the potential to be great. Nothing strokes the pride more than envisioning one as superior or a champion in all areas of life. By simply deemphasizing that the greatest, most gifted should be the servant of the least we can instead announce that the higher a positon one has in life, the more we will celebrate them within the church.

2) Make honorable the relentless quest for money. Instead of quoting that one cannot love God and mammon we can simply tweak that to say you CAN love God and mammon. Just think about how many people we could attract by showing them how to obtain more money. Instead of the rich young ruler being used as an example of misplaced priorities let’s celebrate how he was able to have the best of both worlds – money and morals. People love money and if being a member of the church increases their likelihood of attaining riches, we will certainly gain new converts.

3) Don’t require purity of speech and thought. Instead of the bible teaching that as a man thinketh in his heart so is he, let’s emphasize only the outward moral code. The challenge to develop a life of prayer and Bible study that fosters a change of thinking may be a cause of concern for some. Let’s no longer talk about clean hearts, right spirits and pure speech. Make the outside the only point of concern.

4) Become champions of vengeance. Don’t misunderstand me. I’m talking about justified vengeance. We’ve said for too long that God will repay. The command to forgive seventy times seven we could simply reduce to seven. That’s it – just seven times and then you can bear a grudge and conduct yourself accordingly. Can you imagine the vast number of people who have been wronged and who are stuck in the mire of unforgiveness? Let’s give them a voice and demand retribution from everyone they deem culpable. We certainly could attract a crowd with this.

5) Foster hate and schisms. If ever there was a time to be negative and tolerate speaking against others that time is now. With the emergence of social media and the ability to comment freely from the anonymity of a computer screen we have become accustomed to hearing wild accusations and the exposure of the sins of others as routine. And even more, when it comes to differences of opinions that are not testing truths, let’s turn them into opportunities to vent, debate and fight. Who doesn’t love a good fight? The more we can ignore 1 Corinthians 14:40, “Let all things be done decently and in order,” the more we can attract those who chafe under discipline and are opposed to compromise (unless it’s the opposition who should compromise).

6) Use the Bible as little as possible. Everyone loves good oratorical skills. If we can have our speakers and teachers talk about good, moral subjects, not necessarily Bible doctrines, we can attract more people. Preaching and teaching the Bible results in conviction, and that can be uncomfortable. I know we like to say, “Step out of your comfort zone,” but we don’t want to apply this to the comfort zone of sin. Let’s give the illusion of godly living without actually teaching godly living. Motivation without sanctification sells!

7) Change the priority of seeking the Kingdom of God. Let’s face it, times have changed. When Christ gave the command to seek first the Kingdom of God, that was in a simpler time and place. Way back then there was no way for the average person to even imagine all that this world has to offer. Satan did, and he took Christ up on a mountain and showed the best of the kingdoms of this world to Him. You can read about in Luke 4.

If we can muddle the plain command of Jesus to “Seek first the kingdom of God” to mean something else, we may have more success in attracting new members. You and I know that seeking first the kingdom of God means that our priorities will be for the kingdom. We know that our gifts and talents will be devoted to His service. We know that as a sacrifice to God we will hold nothing back and give our all to Him. You and I know that the real happiness of man is found when man holds nothing back and is led daily by God. And you and I know that His yoke is easy and His burden is light and that He has come to give us life more abundantly. But let’s keep that secret to ourselves. Let’s get those numbers up and let’s not scare anyone away by thoughts of complete surrender.

These seven suggestions have the potential to increase our numbers.

We close this week’s lesson on The Kingdom of God with some very sobering words from Jesus.

“Not everyone who says to Me, ‘Lord, Lord,’ shall enter the kingdom of heaven, but he who does the will of My Father in heaven. Many will say to Me in that day, ‘Lord, Lord, have we not prophesied in Your name, cast out demons in Your name, and done many wonders in Your name?’ And then I will declare to them, ‘I never knew you; depart from Me, you who practice lawlessness!’ Matthew 7:21-23