He told her he loved her. Said she was beautiful. Promised her she would be special. Next thing she knew she was being dragged out of bed by the friends of him who had dragged her into bed, and he who had praised and flattered her just stood and watched her being dragged away.

Now she was kneeling half naked, humiliated before Jesus. Eyes closed, not wanting to see the stones that would soon be crushing her head, she waited in terror. It seemed like eternity. When would it be over? 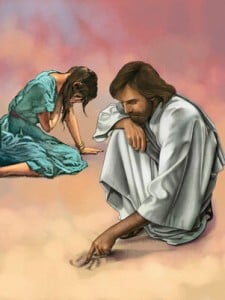 Barely peeking through one eye she sees Jesus doing something in the sand. Not sure what. She hears footsteps as men walk away. What is going on? Then she hears a word she had not heard in years directed at her.

Jesus didn’t call her a “slut,” or “whore.” He called her “woman.” He was addressing her with the same title of respect that He gave to his own mother, who spoke with angels and gave birth to the Son of God.

“….where are those accusers of yours? Has no one condemned you?” John 8:10 NKJV

She opens her eyes and looks around. They are all gone! She makes no accusations against the men. We know little about the background of this woman. She may or may not have been a victim of sex trafficking. But we do know that, terrified as she was, she was ready to face the consequences without blaming anyone else for the choices she had made, and the role she had played, which now brought her half-naked and humiliated into the presence of Jesus. Yet incredibly, as guilty as she was, it was her accusers who slunk away. As she lay helpless at His feet, there was no one to condemn her! When we fall helplessly at the feet of Jesus, there is no condemnation for us either.

He said to her, “Woman, where are those accusers of yours? Has no one condemned you?” (John 8:10 NKJV)

What was next? A sermon? A lecture? Nowhere is it recorded, but I can imagine Jesus placing His coat over her near-naked body.

The Holy One Who would be hanging naked on a cross in front of the entire universe one day, takes off His robe and covers this woman, protecting her human dignity more than just covering her sexuality.

He doesn’t preach to her. He ministers to her.

Did you know you don’t have to be a preacher to be a minister? Ministering to sinners doesn’t always have to include a sermon. An-ill timed sermon can do more harm than good. Jesus could preach with the best of them, but He knew when to preach and when not to preach. He also knew when to minister.

He called her “woman.” He placed His coat over her near-naked body and gave her the sense of dignity she had been promised by the man who betrayed her trust. Then He did not preach to her with words, He ministered to her with words.

His words were brief and clear, yet somehow we get them mixed up. Have we ever told someone “Go and sin no more, and then I will stop condemning you!” That’s not what Jesus said.

Jesus said clearly, “Neither do I condemn you.” Present tense.

The world told her they would stop condemning her once she stopped sinning. Jesus promised not to condemn her, so she could stop sinning.

A man promised her she would be special, and then humiliated and betrayed her.
Jesus gave her dignity back and made her special.

Jesus does not condemn us, so we too may walk in the Spirit instead of the flesh.