↓
Home→Feature→Don’t Be Afraid to Try!

Does the past ever haunt you? Do you ever wish you could go back and do something differently? Every baseball season I am haunted by something that I did, or actually didn’t do when I was 12. Many springs ago, I was a Little League baseball player. It was my first year of organized baseball, while my peers had been playing for years. I had never played fastball before, and those 11 and 12-year-old pitchers threw fastballs by me so fast, that, to me, I might as well have been facing Nolan Ryan! While I did manage to get on base a few times by walking, my career hit total equals 1. 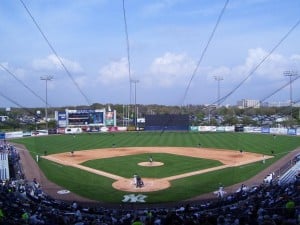 Funny thing is, while my parents came to most all my games, they missed the one game where I got a hit. When I hit that ball into right field, my teammates jumped off the bench and started celebrating like we had won the World Series. The other team was looking over at them, trying to figure out what the big deal was. I told the first baseman it was my first hit. Turns out my only hit.

Eventually I made it to third base, and what happens next, or didn’t happen, is what has haunted me ever since. While I was on third base, the batter squared to bunt. The infield came way in towards home, allowing me to take a gigantic lead off of third base. The pitch landed in the catcher’s mitt. The catcher slowly and carelessly tossed the ball back to the pitcher. That is when I thought, hey, I have such a huge lead off third base already, and the catcher is throwing the ball back to the pitcher so slowly, that if I break for home as soon as the catcher releases the ball, I can steal home before the pitcher throws it back! I waited for my chance. Sure enough the next pitch lands in the catcher’s mitt and the catcher repeats his same slow, careless toss back to the pitcher. However I did not break for home. Instead I thought, wait a minute. The coach is not telling me to run, and if I do get out I will look like an idiot in front of everyone. So I never tried to steal home plate. I was afraid to fail, so I never tried. Now, whenever I see Carl Crawford or B.J. Upton steal home plate, I think to myself, I could have done that too if I had just tried. Looking back now, I am sure I could have made it easily. Only my fear of failure kept me back.

I learned a lesson from standing on third base on that spring afternoon so long ago. Go ahead and try! Even if you don’t make it, at least you will know, instead of wondering about it for the rest of your life, like I have. Many people are afraid to knock on a door to tell somebody about Jesus.

When I was 15 years old, I learned my lesson from when I was 12, and I went door to door in my neighborhood, asking people if they wanted to study the Bible. Many said “no.” At least now I knew, instead of wondering if they did for the rest of my life. One family said “yes” and later accepted my invitation to come with my family to church! Many people tell me they are afraid to give a Bible study to a friend, because they may not be able to answer a question. I tell them, just do what I do. Say, “I don’t know.” The people won’t kill you for not knowing, and you can research it later, and come back with the answer.

A story infinitely sadder than my baseball story happened while I was a Bible worker in West Texas. An elderly married couple in my church told me that another husband and wife, their friends for many decades, had both died. They sadly told me they had never tried to share Jesus with them because they were afraid they would lose their friendship if they saw how “religious” they were! They were more afraid of losing a friend in this life, than they were of losing them eternally.

Friends, don’t be afraid of sharing Jesus. Like all things, you will meet with failure but also much success. Jesus tells us in Matthew 24:14, that the gospel will be preached in all the world before He returns. Every time we invite someone to Jesus, regardless if they accept or reject the invitation, it is still one invitation, one decision closer to Jesus returning. Let’s remember too, that if someone rejects us, it is okay. We are an opportunity, but not their only opportunity. Go ahead and try. That is better than spending the rest of your life wondering what might have been.

When Michael Jordan, a famous basketball player tried to play baseball with the Chicago White Sox, the world laughed at him. He did not make it, but his words have always stayed with me. “I am not afraid of failing. I am afraid of not trying.” If that is true in sports, it is infinitely more true in evangelism! Don’t let the past haunt you. Go ahead and try!