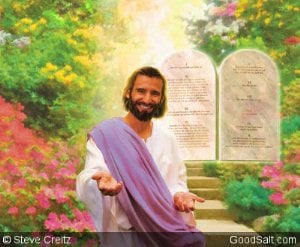 Paul has argued strongly for the supremacy of faith in a person’s relationship with God. He has repeatedly stated that neither circumcision nor any other “works of law” are a prerequisite to salvation, “because by works of the law no one will be justified” (Gal. 2:16, ESV). Moreover, it is not the works of the law but faith that is the defining mark of the believer (Gal. 3:7). This repeated negation of the works of the law raises the question, “Does the law have absolutely no value, then? Did God do away with the law?” 1

Paul’s argument in Romans 3 parallels his discussion about faith and law in Galatians. Sensing that his comments might lead some to conclude that he is exalting faith at the expense of the law, Paul asks the rhetorical question, “Do we then overthrow the law by this faith?” (ESV). The word translated as “overthrow” in Romans 3:31 (ESV) is katargeo. Paul uses the word frequently, and it can be translated as “to nullify” (Rom. 3:3, ESV), “to abolish” (Eph. 2:15), “to brought to nothing” (Rom. 6:6, ESV), or even to destroy (1 Cor. 6:13). Clearly, if Paul wanted to endorse the idea that the law was somehow done away with at the cross, as some people today claim he taught, this would have been the time. But Paul not only denies that sentiment with an emphatic no, he actually states that his gospel “establishes” the law!

“Moreover, genuine faith implies in itself an unreserved willingness to fulfill the will of God in a life of obedience to His law. . . . Real faith, based on wholehearted love for the Saviour, can lead only to obedience.”—The SDA Bible Commentary, vol. 6, p. 510.

Think through the implications if Paul did, indeed, mean that faith nullifies the need to keep the law. Would then, for instance, adultery no longer be sin, or stealing, or even murder? Think about the sorrow, pain, and suffering you could spare yourself if you merely obeyed God’s law. What suffering have you or others gone through totally as a result of disobedience to God’s law?