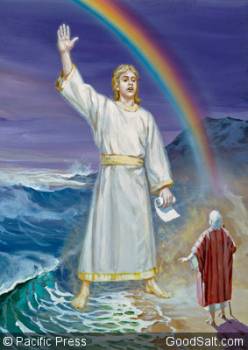 Can we find the picture of our religious ancestors’ birth in Scripture?  Our Adventist pioneers, those intrepid spiritual ancestors who set a pretty high bar in terms of mission, priorities, and love for their Savior, saw themselves in Revelation 10.

So let’s take a look at Revelation 10 and paint a picture that our pioneers saw when they looked at John’s apocalyptic vision.  Most of us today agree with our pioneers that Revelation 10 seems to be a parenthetical insert between the 6th and 7th trumpet.  For our pioneers, Revelation 10 provides the answer to the question, What is the task of the Church in these troublous times?

Who’s the “I?”  John, an old man, banished by the Emperor Domitian for John’s refusal to compromise.  Setting?   A rocky island in the middle of the Aegean Sea.  Several years ago my daughter and I spent several days exploring Patmos.  Hot and dry and lots of volcanic rock—not unlike parts of Eastern Washington State, actually.  We hiked up to the grotto where John was said to have received his visions, sat on the stone wall in the garden, and looked down on the little fishing village of Skala, which probably doesn’t look too different than it did 2000 years ago, motorbikes notwithstanding. It was a precious, sacred experience.

Then I saw another mighty angel coming down from heaven, surrounded by a cloud, and with a rainbow over his head.  He face shone like the sun, and his feet were like pillars of fire.

Who is described as surrounded by clouds in Acts 1:9?

Who is described as having a rainbow over his head in Ezekiel 1:16-28?

Whose feet are like pillars of fire in Revelation 1:15?

Our pioneers saw Jesus in this angel. Oh, maybe Uriah Smith saw Jesus as a created being. But Ellen White saw Jesus as the eternal God, in whom is life, original, unborrowed, underived.  (Desire of Ages, p. 530)  So our pioneers saw this as no ordinary angel, if there be such. This is Christ Himself, with an important message to us, upon whom the ends of the earth have come.  Though physically aged, John’s spirit must have been infused with energy and hope as Jesus brought extraordinary graphics into John’s mind. I can imagine his loneliness dissipating as his Savior stood beside him and encouraged his heart.

And in his hand was a small scroll, which he had unrolled.

The only book said to be closed in Scriptures was Daniel, and according to Daniel 12:4, it would be opened, to our understanding?, at the time of the end.  Our pioneers saw the gospel being opened in a new and living way through the 2300 day/year prophecy of Daniel 8:14. They looked at Daniel 11: 33,35, identified  the papacy as the persecuting power of verse 30, and thus determined that the 1260 day/years referred to the strongest period of papal persecution, beginning in 538 AD and extending to the pope’s exile in 1798. Interestingly, an understanding of the 2300 year prophecy and the imminence of the second coming came just before or just after the turn of the 19th century to Manuel Lacunza in South America, German theologian Johann Bengel, Joseph Wolff who, well, you name the country, he probably traveled and preached there, among other heralds of the second advent. But it would be an upstate New York farmer, self-educated, formerly dyed-in-the-wool deist, who turned the northeast upside down with his exposition of Daniel 8:14. William Miller’s declaration that the sanctuary was the earth, to be cleansed by the fires of the judgment at Jesus’ second coming around 1843 or 1844 prompted a revival and reformation of thousands of persons who were eager to find peace in their souls. Miller preached freedom from guilt, forgiveness of sin, and eternal security in Christ alone. Scores of congregations responded to this new emphasis on the gospel.

Just as the old Steps to Christ cover of Jesus knocking on the door of the United Nations building symbolized Christ’s willingness to knock on every heart’s door, so this word picture seems to infer a global message, not just for New England, but for every continent, every island of the sea.

And he gave a great shout like the roar of a lion.

Who is the lion of the tribe of Judah?  Amos 3:8 says, “A lion has roared!  Who will not fear?  The Lord God has spoken!  Who can but prophesy?”

And when he shouted, the seven thunders answered.

Can you think of times in Scripture when the very voice of God was audible to some, but only thunder to others?  Consider Saul on the way to Damascus, Christ’s baptism, Calvary.  In his commentary on Revelation, Ranko Stefanovic notes that in the Old Testament, when God speaks and acts in power, it is often portrayed as the sound of thunder. When Jesus predicted his death in John 12, the voice of God speaking to Jesus was perceived by the attending crowd as the sound of thunder.  This passage is followed by a reference to judgment of the world.  In Revelation, thunder often functions as the revelatory forewarning of divine activities in judgment, forewarning the breaking of the seals, the trumpet plagues, the warfare between the dragon and the woman and the conclusion of earth’s history leading to the executive phase of judgment.

Why?  Because Daniel 12:4 said the events would be opened at the time of the end, which our pioneers determined would begin around 1798.  Paul wrote to the Thessalonians, Don’t expect the coming of the Lord anytime soon!  The man of sin must first be revealed. (II Thess. 2:2-4) Martin Luther put the judgment 300 years out from his time.  Stefanovic writes, “This prohibition seems strange, for elsewhere in the book John is always instructed to write down what he sees and hears and not to seal the words of the prophecy of this book  So, this prohibition must be very unusual and significant.”

Then the mighty angel standing on the sea and on the land lifted his right hand to heaven.

After she passed the bar exam, we attended our daughter’s swearing-in ceremony at the courthouse in her city.  What an exciting day!  Each of those young soon-to-be practicing attorneys lifted their right hands and took an oath that they would never reject, from any consideration personal to oneself, the cause of the defenseless or oppressed, or delay unjustly the cause of any person.  In antiquity, raising your right hand also signified a solemn oath.

TO BE CONTINUED NEXT WEEK