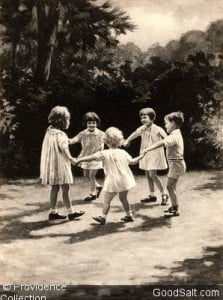 We came to school an hour early almost every day for early rehearsal and spent several weeks in the summer learning the basics of marching and playing our instruments at the same time. Most of my high school friends were in the band, because the band had over 200 members.

Between my freshman year and my senior year we became a really good band – so good that during my senior year, we were invited to march in the Rose Bowl Parade in Pasadena, California on New Year’s Day. You may not be aware (I wasn’t) but being invited is really the easy part. The bands that end up marching in that parade have raised their own money to get there. That’s the hard part! And our band wasn’t small! So, even in 1976, plane tickets and hotel rooms for that many band members, plus chaperones, involved a substantial amount of money.

We were frantic to go, so we started trying to figure out how to raise that kind of money. It became very clear, very quickly, that a bake sale or two was not going to cut it. We came up with a really big plan – we would set a world record of continuous band performance and individual band members would get pledges for the minutes they played.

Oh, sure, we still had the bake sales, the car washes, the garage sales, but all year long we planned and worked toward that world record.

We talked to the Guinness Book of World Record people and found out all the rules and regulations and how carefully the records had to be kept and what kinds of documentation we needed. We set the date for the weekend after school would be out, and we started getting pledges. We found a venue (a local shopping mall) where we hoped to get lots of folks to come out and watch, and we started getting sponsors and advertising. One of the radio stations in town agreed to come out and do live broadcasts. We called it “The Ram Band-A-Rama” and it actually became a big deal.

Now, in case you don’t know, (we didn’t) the world record for continuous band performance, in 1976, was around 48 hours. And the challenger for the record had to beat the existing record by five hours. So, we had to play, as a band, for 53 hours. Everyone who started had to finish, and individuals could take a five minute break every hour or a 15 minute break every three hours.

I’m pretty sure that not one of us had any real concept of how long 53 hours was. Oh sure, we knew how it looked on paper – two nights, one full day and parts of two other days, but we didn’t have an inkling of what it was going to mean to not just stay awake, but to play musical instruments and actual songs, for that amount of time. We were in for a huge surprise.

Our kick-off that first morning was impressive. Not all 200 band members volunteered to be part of our “band-a-thon,” but we had at least 100 band members involved. We made quite a bit of noise in that mall and got lots of attention. One of the former mayors of the city came and directed, people stood around and watched and clapped along. We played loud and well. The people who came to watch us put money in a big bass drum we’d put out for that purpose. We were really having a great time. The first day was easy. The first night wasn’t that bad either; the adrenaline still carried us along.

But there was a point, about 2 or 3 in the morning, where we started to fade. Part of the problem was, nobody had really thought about nourishment. Water became a real issue because this was a long time before anybody ever thought of putting water in bottles and selling it. And, as far as food went, we had all packed a few sandwiches and whatever else and that was it.

By about 9 that second morning, we were on the verge of a complete crash, until one wonderful lady (no idea who she was) walked through the mall and thought to herself, These children need food! She went home and cooked huge pots of beans and made who knows how many tortillas and came back and fed us real food. It was amazing how much that helped.

That whole second day, while people were in the mall, we did okay. We didn’t sound all that great any more, but we were still playing. As the mall closed that second evening, though, and everybody except the band and the parents who were there to help left, the exhaustion really hit us hard. Not only that, butsome band members had blisters on their fingers, some folks’ lips were bleeding, we still hadn’t really gotten enough or the right kind of nutrition, and we hadn’t used our 5/15 minute breaks wisely earlier, so they were worse than no break at all. By midnight of the second night, I’m not sure any of us thought we would make it till morning. But we kept playing and encouraging each other. We sounded awful, but we wouldn’t stop. No one wanted to let his or her band members (team mates) down. On that second night it wasn’t about any single person in the group. We were a unit, and we would make it or not – together.

And we did make it! We played just over 53 hours. When our band director came in that third morning and was there with us at the big finish, it was a really amazing moment. The last piece the band played was “The Stars and Stripes Forever” and it was the most beautiful thing I had ever heard. I still tear up every time I hear it.

Now don’t go looking through any old Guinness Books of World records because, even though we broke the world record, some other (much smaller) band broke our record before the next book was published. Oh well. Too bad it was before the day of the commemorative T-shirt. We would have at least gotten that.

But here’s the real kicker. Our band was invited to go to the 1977 Rose Bowl Parade. Those of us who graduated in 1976, didn’t get to go. A whole bunch of incoming freshman, who hadn’t been part of the band while we were doing all the things that got us invited, got to go in our places. I didn’t occur to us not to help because we weren’t going to go. We were part of the team, the band. Even if we couldn’t go to Pasadena, we did our best to get the rest of the team there.

The good news is that when Jesus comes again, nobody who wants to go with Him will have to stay here. Let’s not forget that we’re the team whose job it is to make sure that nobody misses out on Heaven. It’s just after midnight on that last night before He comes. We’re all exhausted, but He’ll be here soon. Let’s hang on to each other so nobody gives up.

“Two are better than one, because they have a good reward for their labor. For if they fall, one will lift up his companion. But woe to him who is alone when he falls, for he has no one to help him up. Again, if two lie down together, they will keep warm; but how can one be warm alone? Though one may be overpowered by another, two can withstand him. And a threefold cord is not quickly broken.” Ecclesiastes 4:9-12