↓
Home→Feature→Forgiveness Is Not Saying It Is Okay

One Sabbath afternoon I received a phone call from the mother of a child I had corrected earlier at church. The girl had smarted off to me when I told her to stay out of a room that was off-limits. The mother told me, “My daughter wants to tell you she is sorry, but before she gets on the phone, I wanted to ask you, when she says she is sorry, don’t tell her it is okay. Just tell her she is forgiven.” 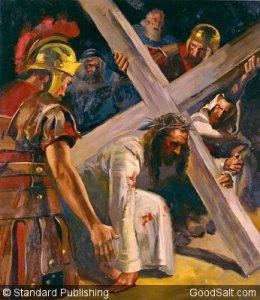 “Wow!” I thought. This mother gets it! Forgiveness is not saying it is okay. So many are slow to forgive, because what happened to them was so wrong they can’t just sweep it under the rug. The deed deserves to be punished. What they don’t understand is that forgiveness is not sweeping it under the rug and saying it is okay. Then what is it saying?

When I share the gospel presentation, I always share this passage from the Desire of Ages. It is so clear and simple, and to me, sums up the whole plan of salvation.

Jesus did not only suffer for my sins, He suffered also for sins committed against me. Why do I need to take it out on my enemy when it has already been taken out on Jesus?

They killed my son! They deserve to die!
Jesus died because they killed your son.

Earlier this year I was reading through the Old Testament, and when I came to Isaiah 53 something jumped out at me, when I read:

Suddenly I realized something I had never seen before. I realized that retaliation against my enemy will never bring me healing. I am healed by the stripes of Jesus, and not the stripes of my enemy. Jesus suffering for my sins can only bring partial healing and partial reconciliation. I am made whole, and totally reconciled, not just to Jesus but to my brothers, when I realize Jesus suffered for their sins too.

In the story in Matthew 18:21-35 a man is forgiven who did not ask to be forgiven. He only asked for more time to pay the debt. However the master forgave the debt anyway. This is important for us to note, because the master represents God who forgave us without us even asking. In the Lord’s prayer we find we are to forgive as we have been forgiven, meaning that we are to forgive in the same manner. God expects us to forgive without being asked to forgive, just as the man was forgiven while only asking for more time to pay the debt.

After the man was forgiven, he goes out and sees a brother who owes him a much smaller debt. Even after being forgiven he refuses to forgive. In the parable the unforgiving man ends up in prison until his full debt is paid.

Forgiveness and reconciliation is not saying “It’s okay.” It is saying, “I realize Jesus suffered for your sins on the cross.” It is realizing I am healed by the stripes Jesus received and not by the stripes my enemy receives. We have to be pretty sick ourselves to think that in order for us to be healed, someone else has to be hurt. Jesus does not have to hurt my enemy in order to heal me.

With His stripes we are all healed.