↓
Home→Feature→God Has Always Been Graceful

This puts the cross before Adam and Eve! Before sin and the written law came on the scene we already had the cross!

Grace is not new to the New Testament. It is in the Old Testament as well. It was at Sinai.

Now therefore, if you will indeed obey My voice and keep My covenant, then you shall be a special treasure to Me above all people; Exodus 19:5 NKJV

In this passage God is pledging His grace to us. 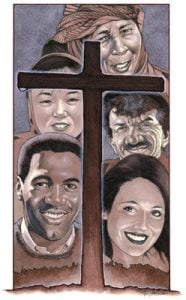 We are already familiar with the word covenant, which is always one-way promise when God is involved. In Genesis 12:1-3 God made a covenant promise to Abraham without asking Abe to promise anything, only believe.

So in Exodus 19:5, God is promising us that if we listen to His voice, and cherish His promises, He will make us a special treasure. Salvation has always been based on the grace of God’s promises. In Exodus 20, God begins the commandments with,

“I am the Lord your God, who brought you out of the land of Egypt, out of the house of bondage. “You shall have no other gods before Me. Exodus 20:2-3 NKJV

God is saying, “you did not save yourselves from bondage by your works. I saved you by my grace. Because of this I promise you won’t need any other gods beside me.”

Even Jesus overcame temptation by trusting His Father’s promises.

The Saviour overcame to show man how he may overcome. All the temptations of Satan, Christ met with the word of God. By trusting in God’s promises, He received power to obey God’s commandments, and the tempter could gain no advantage. -Ellen White, Ministry of Healing, Page 181.

The works of the flesh were never a part of the everlasting gospel in the Old or New Testaments. When Paul said, “for by the works of the law no flesh shall be justified” he was not implying anything new. He was establishing a fact as ancient as God Himself. God has always been graceful.