If you were a high school student in the United States any time in the last 100 years, you were probably assigned the reading of a sermon preached in 1741 by Jonathan Edwards, called “Sinners in the Hands of an Angry God.” It’s not a warm and fuzzy, feel-good sermon. Edwards describes God as angry and anxious to dole out justice to all who deserve it.

“So that, thus it is that natural men are held in the hand of God, over the pit of hell; they have deserved the fiery pit, and are already sentenced to it; and God is dreadfully provoked, his anger is as great towards them as to those that are actually suffering the executions of the fierceness of his wrath in hell, and they have done nothing in the least to appease or abate that anger, neither is God in the least bound by any promise to hold them up one moment; the devil is waiting for them, hell is gaping for them, the flames gather and flash about them, and would fain lay hold on them, and swallow them up; the fire pent up in their own hearts is struggling to break out: and they have no interest in any Mediator, there are no means within reach that can be any security to them. In short, they have no refuge, nothing to take hold of; all that preserves them every moment is the mere arbitrary will, and uncovenanted, unobliged forbearance of an incensed God.”1

“An incensed God” is terrifying, isn’t it? Combined with the statement that “they have done nothing … to appease or abate that Anger,” we see a belief system that is based on works and fear rather than grace and love. It’s a pity that every year, millions of public school students read this sermon and won’t learn that God is not “an angry God.” 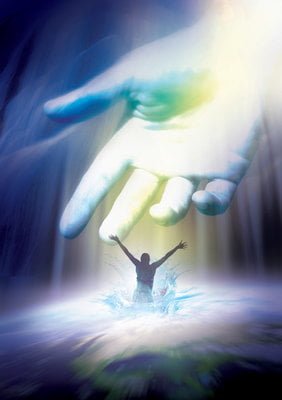 Before Adam and Eve ever fell for Satan’s lie and ate the fruit, God had made a plan to keep us out of Satan’s reach, a plan that would ensure that anybody who wanted to could live with God forever. John the Revelator tells us that Christ was the “Lamb slain from the foundations of the world.” (Rev. 13:8)

“Ever since the fall of man, Satan has been sowing the seeds of error. It was by a lie that he first gained control over men, and thus he still works to overthrow God’s kingdom in the earth and to bring men under his power. A sower from a higher world, Christ came to sow the seeds of truth. He who had stood in the councils of God, who had dwelt in the innermost sanctuary of the Eternal, could bring to men the pure principles of truth. Ever since the fall of man, Christ had been the Revealer of truth to the world. By Him the incorruptible seed, ‘the word of God, which liveth and abideth forever,’ is communicated to men. 1 Peter 1:23. In that first promise spoken to our fallen race in Eden, Christ was sowing the gospel seed.” (E.G. White, A Call to Stand Apart, p. 19)

God never wanted His children to be confused about His plan. He gave Adam and Eve the first object lesson. It showed them that sin caused death – and that, in order for them to live, a perfect lamb had to die.

At Sinai, God gave Moses specific plans for a tabernacle – a constant reminder that God wants to live in the midst of His people. Every part of the tabernacle and the sacrificial system was to point to the coming Messiah and the plan of salvation originating in the counsels of the Most High in the heavenly sanctuary.

Everywhere that God abides with His people is a form of that sanctuary. Eden was the first earthly version of it – God dwelling with His people. When that wasn’t possible any more because sin separates people from God, God gave instructions – first to Moses and then Solomon – for a sanctuary that was a model of the one in heaven, where God’s could live with His people.

When Jesus came to earth, He came as Emmanuel – God with us. He became our Sanctuary. He was God living among His people.

None of that sounds like an angry God who can hardly wait to throw us over the edge. In fact, we know that Jesus is right now, standing before God, in opposition to the “Accuser.” He is pleading the case of us who have accepted His sacrifice as payment for our sins.

And He is praying for us right now – that we might not be overcome by the evil one, the Accuser who is determined to destroy us.

“As Jesus once prayed for Peter, now he prays for us… In fact, the New Testament’s only glimpse of what Jesus is doing right now depicts him at the right hand of God ‘interceding for us.’ In three years of active ministry, Jesus changed the moral landscape of the planet. For nearly two thousand years since, he has been using another tactic: prayer.”2

God’s hands aren’t holding us over the abyss just waiting to throw us in; they carry the scars of His crucifixion – His death in our place. God’s hands are folded in prayer for each and every one of us.

“For God so greatly loved and dearly prized the world that He [even] gave up His only begotten (unique) Son, so that whoever believes in (trusts in, clings to, relies on) Him shall not perish (come to destruction, be lost) but have eternal (everlasting) life. For God did not send the Son into the world in order to judge (to reject, to condemn, to pass sentence on) the world, but that the world might find salvation and be made safe and sound through Him. He who believes in Him [who clings to, trusts in, relies on Him] is not judged [he who trusts in Him never comes up for judgment; for him there is no rejection, no condemnation—he incurs no damnation]; but he who does not believe (cleave to, rely on, trust in Him) is judged already [he has already been convicted and has already received his sentence] because he has not believed in and trusted in the name of the only begotten Son of God. [He is condemned for refusing to let his trust rest in Christ’s name.]” John 3:16-18 (AMP)