Have you ever been caught up in some activity that you knew was not right, but you rationalized it somehow so that you didn’t feel guilty? Rationalization takes a lot of mental and spiritual energy to maintain, but most of the time, the guilt drifts back into your consciousness often enough that you might gradually start to believe that you can’t be forgiven for what you’ve done. 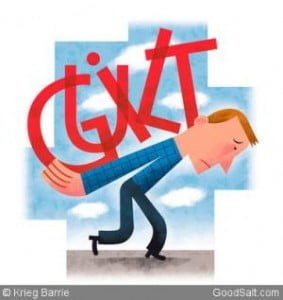 I remember several times rationalizing things that I was doing, trying to make them okay. It’s kind of strange, but during those times, I still loved God and still prayed. What happened, though, was that I started making these little rules for myself: I could sing the song “Jesus loves the little children” but I wouldn’t sing “Jesus loves me” or any other song that expressed Jesus’ love for me. When I prayed, I could pray for other people, but I didn’t allow myself to ask for God’s help for myself… and I certainly couldn’t ask for forgiveness!

Looking back, it almost seems like I was using my guilty conscience to keep God at a “safe” distance. Kind of weird, but I think most of us, at some time or another in our lives, have tried to rationalize something away. We realize we shouldn’t be doing whatever it is, but we aren’t prepared to ask for God’s help yet because we know that He’s going to ask us to stop our wrong activity … so we get caught in a loop of sinning, rationalizing, and guilt.

Sometimes people decide it’s just not worth the effort and walk away from God; sometimes they hide behind their guilt for so long that they just slip away. We don’t feel like we’re good enough to go to church, so we start skipping out more and more often, until we realize we haven’t been to church in months. And if nobody from church calls to ask if everything’s okay, we decide that we were right to stay away.

Eventually though, we have to make the decision one way or the other, because we just can’t carry the guilt any longer. A CBS.news.com article published an article that illustrates that point:

“What’s worse than being trapped behind prison bars? Trying to live while avoiding capture.
“Sergei was a Latvian prison convict with ten months left to serve on his seven-year burglary sentence, when he decided to escape. But even after years of freedom, the escapee couldn’t relax. ‘Worry over being caught was proving too stressful.’ He worked several jobs and moved into an apartment with his girlfriend, but Sergei was constantly looking over his shoulder.
“In a move that surprised prison officials, Sergei showed up at the minimum-security facility and turned himself in five years after he first escaped.”1

Guilt is a tricky thing, isn’t it? The world would tell us that if we enjoy something, we shouldn’t feel guilty about it. Some Christians will tell us that if we’re experiencing guilt that our faith is not strong enough. Some Christians would have us believe that we are sinners and should feel guilty for that. Who’s right? Does guilt serve any worthwhile purpose or is it just a bothersome emotion that keeps us from enjoying life?

I believe (you might disagree with me) that guilt is not just uncomfortable, but motivational. This discomfort can lead people to make a change in their behavior. A FoxNews.com tells the story of John Jefferson who made a life changing decision because he didn’t want to live with the guilt any more.

“‘After I robbed the place I went to get some dope, and I couldn’t even get high. I couldn’t even enjoy it.’ These words come from John Jefferson, a man who robbed a Krispy Kreme Doughnut store in 1999 in order to support his drug habit. After robbing the Kingsport, Tennessee store, Jefferson moved to Kansas—but was plagued with guilt. So much so that he decided to confess.
“Jefferson called Detective David Cole of the Kingsport Police Department and identified himself as the robber. In an interview with the Kingsport Times-News, Jefferson explains: ‘I couldn’t take it anymore. I was sick and tired of the way I was living. I didn’t want to die in a crack house, and I didn’t want to smoke crack anymore.’
After pleading guilty, Jefferson served 6 years in jail. Upon his release, he tried several times to return to the store and repay the money he’d stolen, but he kept turning around before he could get there. Finally, Jefferson called David Cole again and asked him to accompany him to the store. Though he’d stolen $300, Jefferson returned $400 in a check made out to St. Jude Children’s Research Hospital (at the robbery victim’s request).
“Afterwards, Jefferson told the paper, ‘I felt like a million bucks when I walked out of that place.’”2

Which brings me to my next questions…Why would we waste even one second on guilt when forgiveness is so close, and Jesus is so eager to give it.

Look at this example of what just earthly forgiveness will do:

“When Shannon Ethridge was just 16 years old, an act of forgiveness and love changed her life forever. While driving to her high school one day, Ethridge ran over Marjorie Jarstfar, a woman who was riding her bicycle along a country road. Marjorie died as a result, and Ethridge, who was found completely at fault by authorities, was consumed by intense guilt. She contemplated suicide several times, but she never took her life because of the healing response of one man: Gary, Jarstfar’s husband.
“Gary forgave the 16-year-old and asked the attorney to drop all charges against her, saving her from a probable guilty verdict. Instead, he simply asked that Ethridge continue on in the godly footsteps that his wife had taken. ‘You can’t let this ruin your life,’ Gary told her more than 20 years ago. ‘God wants to strengthen you through this. In fact, I am passing Marjorie’s legacy on to you.’
Gary’s act of forgiveness showed Ethridge the amazing love of God. Today, Ethridge is the bestselling author of Every Girl’s Battle and Every Woman’s Battle, and her recent book, Completely His: Loving Jesus Without Limits, helps women overcome guilt-ridden, wounded lives.”3

Gary forgave Shannon and gave her a mission. Christ forgives us and gives us a mission:

“I will rescue you from your own people and from the Gentiles. I am sending you to them to open their eyes and turn them from darkness to light, and from the power of Satan to God, so that they may receive forgiveness of sins and a place among those who are sanctified by faith in me.’ Acts 26:17-18

Jesus promises to remove every speck of sin and guilt from our lives and fill us with the light of His loving forgiveness. And He gives us the mission to share that light and love with those around us, “to turn them from the darkness to light, and from the power of Satan to God” so that they, too, might find a place “among those who are sanctified.”