↓
Home→Feature→Do We Keep the Change Or Not?

If you have ever been around a cat, you might have noticed its whiskers. Have you ever wondered about the purpose for those whiskers? Well, believe it or not, a cat’s whiskers work kind of like the Holy Spirit. They warn the cat that it is going into a dangerous place.

“… the whisker’s primary use is to help a cat judge whether or not he’ll fit through an opening. A cat’s whiskers are roughly as wide as his body — sort of a natural ruler. 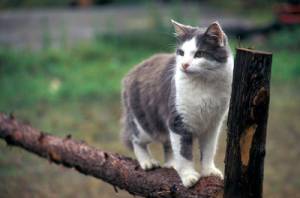 The whisker tips are sensitive to pressure. You’ll probably see a cat stick his head in and out of an opening before he puts his body in. He’s judging the width of the opening, and is determining if he can fit into it.”1

Also like the Holy Spirit, the cat can ignore what his whiskers are telling him. Let me tell you how I know that.

The house where I grew up was built by my parents primarily out of rocks and glass. The head of my bed was against one of these rock walls, so that often I heard puzzling and frightening noises from outside, usually in the middle of the night.

One night I heard what sounded like someone hitting a jar on my bedroom wall. The sound went on for long enough that I was sure there was a stranger outside my room hitting my wall with a glass jar.

I jumped out of bed and ran to my parents’ room, woke up my father and made him go outside and chase the man away. (Not the first or the last time I did that, by the way.) Of course, by the time he got there, there was no one to chase away. This happened three nights in a row. (My dad was a very patient man.)

On the evening of what would have been the fourth night, we were all in the living room watching TV when we all heard what sounded like someone hitting our sliding glass patio door with something quite hard – not hard enough to break the glass, but hard enough to make a loud noise. We jumped up to go look and found nobody. We thought it must have been our neighbor boy playing a joke on us, and we planned to ask him about it the next day.

The next day came, and he claimed to know nothing about knocking on our door. We felt like we had quite a mystery. Later that same day, though, I was outside and saw a truly strange thing. I saw a cat walking around with his head in a mayonnaise jar.

Hmm … All the weird noises suddenly made sense! He was a youngish cat – not a kitten, but not fully grown yet, and so he was having some trouble walking and navigating with that big jar on his head. Even so, when I walked toward him, to pull it off, he ran away from me. (Keep in mind, he’d been stuck in that jar for a minimum of four days at that point.)

I got my dad and we finally caught up to him. That was surprisingly difficult. But we finally threw a towel over him and held him down so that my dad could break the jar off of his head.

You’d think that cat would have been grateful. If he was, he didn’t show it. He just ran off. Hopefully though, the next time his whiskers told him not to put his head in something, he paid attention to the warning.

We really want to check it out, so we stick our noses just a little way in. The Holy Spirit says, “Back out now. You’ll get stuck in there.” But it’s so cool and so much fun that we stick our heads all the way inside that jar – and then we realize how trapped we are. We’re trapped, and there’s absolutely nothing we can do to free ourselves from our mayonnaise jar of sin.

We wander around, stuck, starving, suffocating, and lost until Jesus comes to set us free. We’re afraid to accept His help. We’re stuck in sin, and we’re dying, but we’re not sure we want to make any changes in the way we’re living our lives. Finally when we’re exhausted from banging our heads against things trying to free ourselves, we let Jesus take us out of our sin and rescue us.

Jesus has changed our circumstances, given us hope and a future, (For I know the plans I have for you,” declares the Lord, “plans to prosper you and not to harm you, plans to give you hope and a future. Jeremiah 29:11 NIV) but how often do we run back to the sin that trapped us rather than keeping the change that Jesus died to give us?

“What then? Shall we sin because we are not under law but under grace? Certainly not! Do you not know that to whom you present yourselves slaves to obey, you are that one’s slaves whom you obey, whether of sin leading to death, or of obedience leading to righteousness? But God be thanked that though you were slaves of sin, yet you obeyed from the heart that form of doctrine to which you were delivered. And having been set free from sin, you became slaves of righteousness. I speak in human terms because of the weakness of your flesh. For just as you presented your members as slaves of uncleanness, and of lawlessness leading to more lawlessness, so now present your members as slaves of righteousness for holiness.

“For when you were slaves of sin, you were free in regard to righteousness. What fruit did you have then in the things of which you are now ashamed? For the end of those things is death. But now having been set free from sin, and having become slaves of God, you have your fruit to holiness, and the end, everlasting life. For the wages of sin is death, but the gift of God is eternal life in Christ Jesus our Lord.” Romans 6:15-23

Those were Paul’s words. A contemporary song says it this way:

Repentance is turning around and going a different way, towards heaven. Jesus has provided that different way, so let’s resolve to “keep the change” that Jesus provided for us at such great cost.