↓
Home→Feature→I Am Living in My Last Days 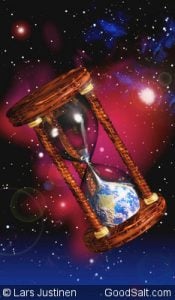 In 1979 when I was 14, I received a letter from the Tulsa Roughnecks major league soccer (football) team, asking me to renew my season tickets for the 1980 season. I could not believe my eyes. There it was – “1980” in print! Growing up Seventh-day Adventist, I was told we were in the “last days.” The fuel crisis was going to bring an economic disaster, which would cause a national Sunday law. I never imagined the world lasting beyond the 70’s. Hence it shocked me to see “1980” in print. I was sure the world would not last all the way until 1980.

Now we are well into the 21st century. (By the way I love telling kids stories about growing up back in the nineteen hundreds. But I digress.)

Meanwhile I have grieved the deaths of several loved ones, who I was sure would still be alive when Jesus returned. Back in the 1960’s and 70’s an Adventist child needn’t worry about parents growing old and dying, since we were always told Jesus would be coming back within the next five years.

Now I am closer to retirement than I am my high school graduation. Funny, in grade school we thought it would be forever until we graduated. Now its been forever since we graduated!

Still my faith in Jesus’ return has never wavered. I don’t feel Jesus has let me down, as He never promised to come back within the next five years. And Jesus never told my pastors and Bible teachers to tell me He was coming back within five years. That’s all on them. Bless their hearts, they meant well!

Even though I always imagined myself hiding in the mountains during the time of trouble when Jesus comes, I am now faced with the probability of my own death. I may be one of those resurrected when Jesus comes. People tell me I am still young, but I have done the math. If I live as long as my mother lived, I have 28 years left. I am not even promised that long, but based on life expectancy, my time on earth is probably less than 30 years. I am living in my last days!

whereas you do not know what will happen tomorrow. For what is your life? It is even a vapor that appears for a little time and then vanishes away. James 4:14 NKJV

Regardless if Jesus comes in the next 5 years or 200 years, I am looking at 30 years max that I have to endure this old earth. When I die, my wait will be over. The next thing I know Jesus will becoming! 30 years is nothing! I am living in my last days!

So teach us to number our days, That we may gain a heart of wisdom. Psalm 90:12 NKJV