↓
Home→Daily→Tuesday: I Have Become as You Are 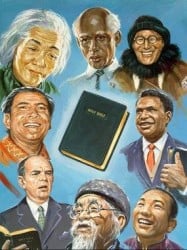 Galatians 4:12 can seem a little confusing. Why should the Galatians become like Paul, if he had already become like them? 1

As we saw in yesterday’s lesson, Paul wanted them to become like him in his complete faith and confidence in the all-sufficiency of Christ for salvation. His comment about having become like them was a reminder of how, although he was a Jew, he had become a Gentile “without the law” so that he might reach the Gentiles among them with the gospel. As the great missionary to the Gentile world, Paul had learned how to preach the gospel to both Jews and Gentiles. In fact, according to 1 Corinthians 9:19–23, though the gospel remained the same, Paul’s method varied depending on the people he was trying to reach.

“Paul was a pioneer in what we call today contextualization, the need to communicate the gospel in such a way that it speaks to the total context of the people to whom it is addressed.”—Timothy George, The New American Commentary: Galatians (Nashville, Tenn.: Broadman & Holman Publishers, 1994), p. 321.

Paul’s own comments in 1 Corinthians 9:21 indicate that he believed there were limits to how far someone should go in contextualizing the gospel. He mentions, for example, that while one is free to reach out in different ways to Jews and Gentiles, this freedom does not include the right to live a lawless lifestyle, for Christians are under the “law of Christ.”

Although contextualization is not always easy, “insofar as we are able to separate the heart of the gospel from its cultural cocoon, to contextualize the message of Christ without compromising its content, we too should become imitators of Paul.”—Timothy George, Galatians, pp. 321, 322.

It’s so easy to compromise, isn’t it? Sometimes the longer one is a Christian, the easier compromise gets too. Why might that be so? Look at yourself, honestly. How much compromise has crept into your life, and what have been the ways you have justified it? How can you turn this around in areas where you need to?