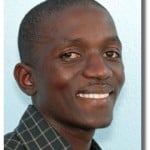 Jony Ernesto lives in Angola, a country in southwestern Africa. He is studying to become a teacher. He attends a government university where classes are held Monday through Saturday. Jony and the other Adventist students at the school simply skipped classes that are scheduled on Sabbaths. And when their exams are scheduled for Sabbaths, they ask permission to take the exams on another day. Because there are many Adventist students in Angola, most teachers allowed students Sabbath privileges.

Jony’s math teacher had two Adventists in his class, but he refused to reschedule an exam planned for Sabbath. “Whoever misses this class will receive a zero exam grade,” the teacher threatened. When Jony and the other Adventist student pleaded for him to reconsider, the teacher told them, “Other students take their tests on Saturday, and I expect you to do so too. God likes you to have a good education. Skip church and take the test.”

Jony and his friend quietly left the teacher’s office. The boys knew that they would fail the test, but they weren’t ready to give up yet. They agreed to pray about the exam and the teacher some more. Jony went home to pray and study. The next day a student leader found Jony and told him, “I’ve been looking for you for an hour! The math teacher wants to talk with you in his office—right away.” Jony found his Adventist friend, and together the two hurried to the math teacher’s office. They knocked gently at the teacher’s door and entered when invited. They found their professor pacing the floor.

The teacher returned to his desk and invited the two students to sit down. “I couldn’t sleep last night,” he began. “And it was because of you two. I thought about you two and your Sabbath. I realize that your faith in God is true and strong and powerful. Now I don’t want any problems with your God, so I will let you take your math exam on Friday.”

Jony and his friend smiled broadly and thanked their teacher. They promised to present themselves at the appointed time on Friday. After taking their exam, they again thanked their teacher for allowing them to take the test early. On Sabbath when their classmates were taking the exam, Jony and his friend stood in church to tell the congregation what God had done for them in softening the heart of their once-obstinate teacher.

Our mission offerings help further the work in Angola, where almost 350,000 Adventists share their faith.