From the time they were first uttered, the words of the prophet Isaiah have been etched, even embedded, into our consciousness. There are unforgettable words, heavy laden not only with meaning but with hope and with promise, words like “God is with us” (Isa: 7:14, TLB), “For unto us a child is born” (Isa: 9:6), “Every valley shall be exalted” (Isa: 40:4), and “he was wounded for our transgressions, he was bruised for our iniquities: the chastisement of our peace was upon him; and with his stripes we are healed” (Isa: 53:5). 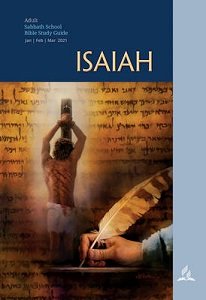 This, of course, explains why Isaiah’s words speak so loudly, so crisply to us—even after 27 centuries.

In his suffering-servant poem, for instance (Isa: 52:13-53:12), Isaiah brings a picture of the Messiah into finer resolution than anywhere else in the Old Testament. This section alone is enough to justify the name, “the gospel prophet.”

Plus, his prediction of Cyrus, by name, a century and a half before the Persian king conquered Babylon (Isa: 44:28-45:6), is so stunningly specific that some scholars have attributed much of Isaiah to a later “second Isaiah,” a hollow creation of those unable to see past the crusty intellectual confines of human imagination.

With a unique blend of vivid imagery, matchless poetic rhythm and balance, Beethoven-like dramatic contrasts, and a rich weave of profound themes that recur in a sophisticated symphonic process of ongoing elaboration and development, Isaiah’s inspired book is a worthy literary vehicle for divine thoughts that are higher than the mundane as the heavens are higher than the earth (see Isa: 55:9). Even in translation, which loses the evocative word plays and alliterations of the Hebrew, the book of Isaiah has few peers in the history of literature, whether secular or sacred.

We know his words, so eloquent, so poetic, so emotive and powerful, but do we know the man Isaiah and the world in which he wrote, prayed, and prophesied? As the cruel Assyrian Empire rose to its height of power, it was a time of crushing peril. Even worse, the people of Judah, the chosen people, were sinking ever deeper into moral weakness. Greed and misery fought in the streets. In their struggle for wealth or survival, some puffed the narcotic vapors of vain euphoria while others withered in despair. Seeking to preserve his nation’s identity by taking a remnant from a state of denial and anchoring them in reality, Isaiah called upon his people to behold their God, the Holy One of Israel, the Creator of heaven and earth, the one who knew them by name and who promised to redeem them from fire, but only if they would listen—and obey.

Isaiah counseled kings. When the slender thread of God’s remnant line was confined to one city doomed by Assyrian legions, it was Isaiah’s prophetic words that strengthened King Hezekiah to look for the miracle that was Jerusalem’s only hope (Isaiah 36, 37). If Jerusalem had fallen then, rather than to the Babylonians a century later, the Assyrian policy of scattering conquered peoples could have vaporized the national identity of Judah. Thus, there would have been no Jewish people from whom the Messiah, the Savior of the world, would arise.

This quarter, we take a look at Isaiah, at his words, his times, his predicaments, but mostly at his God, the God who, back then as well as today, cries out to us, “Fear not: for I have redeemed thee, I have called thee by thy name; thou art mine” (Isa: 43:1).

Dr. Roy Gane, a Hebrew scholar, is a teacher of Old Testament at the Seventh-day Adventist Theological Seminary on the campus of Andrews University, in Berrien Springs, Michigan.