In an effort to “get us,” the enemy tells us lies, half-truths and even complete truths (in deceptive ways) in his effort to get us to doubt our Salvation. Let’s look at a few of his arrows. 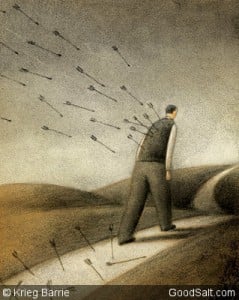 One of Satan’s most successful lies is that God doesn’t really love us at all – that He’s out to get us.

Satan will point to things that are happening in our lives and cause us to question God’s love and guidance. “Why would God let these things happen to me, if He really was on my side?”

I’m sure you’ve heard people talk about God as though He is just waiting for us to screw up so He can keep us out of Heaven, right? It makes God sound like a heathen deity which as to be appeased Him in some way in order to be good to us. Thankfully, because of Jesus’ life and death, we know that God is not like that.

“For God so loved the world that He gave His only begotten Son, that whoever believes in Him should not perish but have everlasting life. For God did not send His Son into the world to condemn the world, but that the world through Him might be saved.” John 3:16-17

Satan reminds us of our track record

Other times, all Satan has to do is remind us of our own track record.  “Hey!” he brags, “have you seen this list? What are you thinking? What’s your excuse? You can’t defend yourself against the dirt I have on you.”

The scary part is, he’s not lying, it is 100% true – he does have a record of every sin we’ve ever committed. And without Jesus, we have absolutely no defense. Without Jesus we are doomed.

“Satan has an accurate knowledge of the sins that he has tempted God’s people to commit, and he urges his accusations against them, declaring that by their sins they have forfeited divine protection, and claiming that he has the right to destroy them. He pronounces them just as deserving as himself of exclusion from the favor of God. . . But while the followers of Christ have sinned, they have not given themselves up to be controlled by the satanic agencies. They have repented of their sins and have sought the Lord in humility and contrition, and the divine Advocate pleads in their behalf. He who has been most abused by their ingratitude, who knows their sin and also their penitence, declares: ‘The Lord rebuke thee, O Satan. I gave My life for these souls. They are graven upon the palms of My hands. They may have imperfections of character; they may have failed in their endeavors; but they have repented, and I have forgiven and accepted them.’” (Ellen G. White, Prophets and Kings, pp. 588, 589)

The Investigative Judgment is a good thing because it obliterates the record of sin so it can never be brought against us again!

Along the same lines, Satan will try to get us to question whether or not we’ve actually been forgiven and cause us to wonder if forgiveness is enough. “You can say you are forgiven, but there is a payback day coming—a condemnation day,” Satan insinuates. “How will you defend yourself then?”

Satan has made sure that when most of us think about judgment – even those of us who claim to rest our assurance of salvation in Jesus – we experience some sense of foreboding. The enemy has twisted and clouded the purpose of the judgment so much that most of us don’t see the promise of freedom, even vindication, within it. Daniel describes the the pre-Advent Judgment, which is going on right now:

“I was watching; and the same horn was making war against the saints, and prevailing against them, until the Ancient of Days came, and a judgment was made in favor of the saints of the Most High, and the time came for the saints to possess the kingdom.” Daniel 7:21-22

“A judgment was made in favor of the saints.” Does that sound like condemnation? It doesn’t to me. It sounds like Jesus is showing God each of our records wiped clean because we have accepted His sacrifice in payment for the wages of our sins.

“But now the righteousness of God apart from the law is revealed, being witnessed by the Law and the Prophets, even the righteousness of God, through faith in Jesus Christ, to all and on all who believe. For there is no difference; for all have sinned and fall short of the glory of God, being justified freely by His grace through the redemption that is in Christ Jesus, whom God set forth as a propitiation by His blood, through faith, to demonstrate His righteousness, because in His forbearance God had pass over the sins that were previously committed, to demonstrate at the present time His righteousness, that He might be just and the justifier of the one who has faith in Jesus.” Romans 3:21-26

The Investigative Judgment is a good thing, because God does it for us, affirming our place in the heavenly Kingdom, based on our acceptance of the righteousness of Jesus Christ.

Satan makes us think our situation is hopeless

Satan wants us to believe that trying is pointless, and our situation is hopeless. “Given your track record, what hope is there that you will persevere to the end?” That one gets a lot of us … because, again, without Jesus, it is absolutely true. With our own strength of will, we cannot persevere. We will fail. It’s only by clinging to Jesus that we can claim His assurance that anyone who loves Him will spend eternity with Him. He has paid the price for us to enter God’s Kingdom.

“Let not your heart be troubled; you believe in God, believe also in Me. In My Father’s house are many mansions; if it were not so, I would have told you. I go to prepare a place for you. And if I go and prepare a place for you, I will come again and receive you to Myself; that where I am, there you may be also.” John 14:1-3

The Investigative Judgment is a good thing because Christ stand in our place, and He gives us the strength we need in the here and now.

Prepared for the test

When I was a senior in high school, my English 4 teacher was believed by students and faculty alike to be the hardest English teacher in the school (There were probably 15 teachers in the English Department). One of the reasons was her reading list. She didn’t ask for book reports or book projects every week or six weeks or semester. In the first week of school she handed out a list of probably 75 “classics” and told us that by the end of the school year we were to have read ten. At the end of the school year we would take a test that covered the books we’d read. She was only going to remind us along the way, it was up to us to get the books read. She suggested that we start immediately because, actually, nine months isn’t really that long to read ten classics.

Well, I jumped right in, picked ten books, and went and bought them. I figured I’d be reading something anyway, I might as well be reading the assigned books. As the school year progressed, I’d listen to other students comment that they hadn’t started reading yet, or that they planned to just read the Cliff’s Notes. They talked about what they’d heard from previous students about the difficulty of the test – that it was impossible to pass, that it wasn’t fair to expect folks to read that much. Funny thing was, I was looking forward to taking the test.

At about spring break, people started panicking and rushing around trying to figure out which ten books they could read the quickest, if they could round up nine other friends and each read one book and then share information with each other, if the Cliff’s Notes would really help them answer specific questions. And I knew that I was going to be OK. I could smile to myself and feel confident that I was going to pass that test.

All year there had been some students who thought it was funny that I was actually reading the books. The test would demonstrate to everyone that doing the assignment wasn’t silly or impossible or a waste of time. It was a good feeling, a feeling of assurance. I didn’t experience the stress and anxiety the others did.

We don’t have to worry about the judgment either when we have been walking with Jesus all along, even when Satan wanted us to believe it was silly, or impossible or a waste of time.

The Judgment isn’t about condemning us, it’s about showing the Universe that God is good and fair and that His plan for our salvation works. The Judgment is a good thing.

Assurance in the here and now

Tullian Tchividjian tells a story about two college friends, Wayne and Dave, who both applied early for admission to the same college.

“That December, Wayne was accepted and Dave was deferred. The next four months, during which Dave waited for the final ruling, looked very different—and very similar—for each of them. … No longer under the watchful eye of the all-important transcript, Wayne decided to branch out in his extracurricular activities. He started a band and got into rock-climbing. He even pioneered a program teaching underprivileged kids in the community how to climb. … Meanwhile, Dave got involved in a bunch of extracurriculars … that he thought might boost his chances at getting into his dream college.

“By the end of the semester, Dave was exhausted, and Wayne was full of energy. Although Dave did well and kept up his GPA, Wayne got the best grades of his high school career! Freed from having to play it safe, he wrote his papers about topics he was genuinely interested in, rather than the ones he thought the teacher would appreciate, and it showed on the page. Their paths may not have looked very different to the outside eye, but one of these guys was carrying a burden of expectation and one wasn’t. No wonder it felt like such a slog.

“The fruit of assurance in Wayne’s life was not laziness but creativity, charity and fun. Set free from the imperative to perform, his performance shot off the charts. Set free from having to earn his future, he enjoyed his present. Set free from the burden of self-focus, he was inspired to serve others—and without being told he needed to do so!”1

When we recognize that the Pre-Advent Judgment is a good thing, because God is for us, we can live our life here and now in full assurance that our salvation is assured in  Jesus Christ. We don’t have to worry about our own salvation, about “making it,” which is surely a self-centered focus. Instead, we are free to focus on serving others. We can begin the life of the eternal Kingdom right here and now – a life of freedom and joy in the assurance of God’s love which spills over into the lives of those around us.