This was the day the disciples had waited their whole lifetimes for. Years of hoping and longing, decades of expectation were now being realized in this very moment. Since they had been small children the promise of a deliverer was instilled into them. From childhood they had learned that one day, hopefully in their lifetime, the Messiah would come. 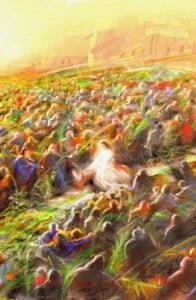 Now they found themselves front row to the greatest moment of their nation – their Messiah was about to take the throne. Everything was going according to script. Jesus had given them directions to secure a colt for His use, and this was right in line with the scriptures.

“Rejoice greatly, O daughter of Zion; shout, O daughter of Jerusalem: behold, thy King cometh unto thee: He is just, and having salvation; lowly, and riding upon an ass, and upon a colt the foal of an ass.” Zech. 9:9

The news spread like wildfire throughout the area. A massive crowd gathered and the hopes of the nation were at a fever pitch. I’m sure that as Jesus mounted the colt the shouts of the people were deafening.

Picture the crowd swelling as Jesus, mounted on the colt, slowly heads toward the city of Jerusalem. Many in the crowd took off their outer garments and, as a tribute to their coming King, they laid them in the path He would travel.

Many authors have painted the picture of the view that greeted Jesus and the throng from the hill overlooking Jerusalem. The city and its massive temple was a wonder to behold. There was no denying the favor of God that was a part of their fabled history. With the glistening sun highlighting their house of worship, who would not be swept up in the emotions of that moment?

But suddenly Jesus paused. Instead of waving to his beloved subjects as a coming king, Jesus began to cry. Not tears of joy. No, this was a weeping that was a stark intruder among the shouts of joy and affirmations that rang out in the air.

In puzzlement the multitude became silent. What could be so wrong on a day that was going so well? Why would Jesus, with so many shouting His praise, now be consumed with grief? From atop the colt, in tears, Jesus wailed out these words of anguish…

“If you had known, even you, especially in this your day, the things that make for your peace! But now they are hidden from your eyes.” Luke 19:42

His words reveal the source of his grief. Although they were singing His praise, they really had no clue of who He really was. Nor did they have any awareness of their own condition as a people. The deception that ensnared the nation was so deep that some of the same voices that shouted in triumph that day would be shouting for his execution a short time later.

It’s a sobering thought to realize how misguided we can be. Our spiritual predecessor, the Jewish nation, lays before us the danger of not realizing the significance of the moment. Their longing for a deliverer from physical bondage blinded their eyes to their need of a Deliver from the bondage of sin. Their passion for supremacy dwarfed their passion for righteousness. And this would prove their ruin.

We close this week’s lesson on Jesus in Jerusalem with some insight on walking in the light of truth.

Then spake Jesus again unto them, saying, I am the light of the world: he that followeth me shall not walk in darkness, but shall have the light of life. John 8:12