↓
Home→Feature→Jesus Taught Everyone With Dignity and Compassion

For years Seventh-day Adventists have loved pointing out that while Jesus forgave the woman trapped in adultery, He also told her to “sin no more.” And for years Seventh-day Adventists have been overlooking one of the greatest lessons Jesus ever taught. Jesus did not tell the woman to go and sin no more and then He would not condemn her. He told her He would not condemn her. More than freeing her from the condemnation of the law, Jesus was freeing the sex-slave who was callously thrown at his feet from her own self-condemnation. He was restoring her dignity and sense of self-worth so she was was now free to live the better life that she so desperately longed for but had only dreamed about. 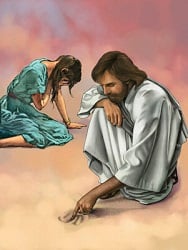 They  told her they loved her. Said she was beautiful. Promised her she would be special. Next thing she knew she was being dragged out of bed by the very ones who dragged her into bed, and those who had praised and flattered her just stood and watched her being dragged away, as their trap and plan unfolded.

Now she is kneeling – half-naked, humiliated before Jesus. Eyes closed, not wanting to see the stones that will soon be crushing her head, she waits in terror. It seems like eternity. When will it be over?

Barely peeking through one eye, she sees Jesus doing something in the sand. Not sure what. She hears footsteps as men walk away. What is going on? Then she hears a word she had not heard in years directed at her.

Jesus doesn’t call her a “slut,” or “whore.” He calls her “woman.” He is addressing her with the same title of respect that He gives to his own mother, who spoke with angels and gave birth to the Son of God.

“….where are those accusers of yours? Has no one condemned you?” John 8:10 NKJV

She opens her eyes and looks around. They are all gone! She makes no accusations against the men. We know little about the background of this woman. She may or may not have been a victim of sex trafficking. But we do know that, terrified as she was, she was ready to face the consequences without blaming anyone else for the choices she had made and the role she had played, which now brought her half-naked and humiliated into the presence of Jesus. Yet, incredibly, as guilty as she is, it is her accusers who slink away. As she lies helpless at His feet, there is no one to condemn her!

When we fall helplessly at the feet of Jesus, there is no condemnation for us either.

He said to her, “Woman, where are those accusers of yours? Has no one condemned you?” (John 8:10 NKJV)

What was next? A sermon? A lecture? Nowhere is it recorded, but I can imagine Jesus placing His coat over her near-naked body.

The Holy One Who would be hanging naked on a cross in front of the entire universe one day, takes off His coat and covers this woman, protecting her human dignity more than just covering her sexuality.

He doesn’t preach to her. He ministers to her.

Did you know you don’t have to be a preacher to be a minister? Ministering to sinners doesn’t always have to include a sermon. An-ill timed sermon can do more harm than good. Jesus could preach with the best of them, but He knew when to preach and when not to preach. He also knew when to minister.

He called her “woman.” He placed His coat over her near-naked body and gave her the sense of dignity she had been promised by the man who betrayed her trust. Then He did not preach to her with words, He ministered to her with words.

His words were brief and clear, yet somehow we get them mixed up. Have we ever told someone “Go and sin no more, and then I will stop condemning you!” Have you ever told a young man or woman, “we treat you like a child because you act like a child? Stop acting that way and then we will stop treating you that way.” That’s not what Jesus said. Jesus restored her dignity instead of asking her to act more dignified.

Jesus said clearly, “Neither do I condemn you.” Present tense.

The world told her they would stop condemning her once she stopped sinning. Jesus promised not to condemn her, so she could stop sinning.

Men promised her she would be special and then humiliated and betrayed her.
Jesus restored her dignity and made her special.

There was no condemnation for this woman at the feet of Jesus, and there is no condemnation for you, when you kneel at the feet of Jesus. I love how Jesus turned a dirty trick into something beautiful. No matter how ill intended their evil plot was, these wicked men still brought a woman to the feet of Jesus where she found salvation! Their plan backfired! Grace has a way of defeating every intention of Satan. To this day we still do not know exactly what Jesus wrote in the sand that day. That message was for those evil men alone. He wrote in the sand so he could reach their hearts without anyone else being able to see. Jesus will leave no means undone in His attempt to save, but public humiliation is the last thing Jesus wants to do if there is any way around it. That is one reason why Jesus says in Matthew 18 to go to the offender privately so hopefully it can be resolved without anyone else hearing of the matter. Still Jesus loves the sinner so much if not resolved it may have to be brought before the entire church and public humiliation may have to be encountered so salvation can become a reality. Yet Jesus wants to protect human dignity. After all. He worked His first miracle of turning water into wine just to save a host from public embarrassment. He wrote in the sand to save sinners from public embarrassment, while also protecting the dignity of the woman. Pictures of Jesus hanging on the cross show a towel around His waist. Reality check: There was no towel around his waist in real life. Jesus hung naked in front of the entire universe taking on all of the public humiliation the universe deserves, so He could save the universe from all of the public humiliation the entire universe deserves. Let that sink in. Ellen White in Desire of Ages, page 25 tells us Jesus was treated as we deserve so we can be treated as he deserves.

Jesus, the Master teacher did not embarrass His students. He dignified them. He did not tell them to stop making mistakes so He could stop condemning them. He stopped condemning them so they could be free from making the same mistakes again.