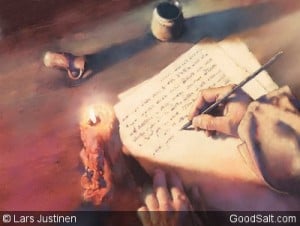 I am so grieved I can barely write. My younger son asked for his inheritance, and has taken it and left home. I thought he loved me, but he only loved the things I gave him, and apparently wants nothing to do with me personally. My only solace is in my oldest son, who is still by my side and there whenever I need him. At least one of my sons loves me.

It has been two months since my youngest son walked out of my life. Oh how I long to have my son back! My servants have been filling in, doing all the tasks that he used to do, and even my oldest son has pitched in after all of his work but they can’t take the place in my heart that only he can fill. It’s not the work he did that concerns me. I miss our walks together. I miss our conversations at the dinner table. Now I am so sad I can’t even eat. Many nights I find myself skipping dinner and just sitting on the front porch staring out over the hills. Sometimes the children will be playing on the hills, and it reminds me of when my son was young and would play on those hills. He would see me from a distance, when I stepped out onto the porch, and he would know dinner was ready and would come running to the house. Many nights I dream of him running home to me again. While my older son can never fill the void in my heart that my younger son has created, I cherish my time with my older son even more. Now I know how precious those moments are. I am so glad my older son loves me!

It’s my older son’s birthday today. Oh what a joy and comfort he is to me! He is always there for me. I treasure every moment we spend together. I had planned to prepare a goat for his birthday celebration but then I thought better of it. I am sure my son is grieved that his brother is still missing, and would not feel like celebrating while his brother is gone. After all, he can have a goat any time he wants. Besides, I would rather eat soup with both my sons than to have a feast without them. I am sure my older son feels the same way. I sure do love him and am so glad he loves me and has not run away too.

I am so excited I can hardly write! Tonight I was standing on my porch staring off into the hills, and at first I thought I was dreaming when I saw my son coming home. Next thing I knew I was running out to meet him. I kept hugging and kissing him making sure it was really him and not just a re-occurring dream I have been having over and over ever since he left. It was really him! He is home! All my dreams have come true! He is home! Tomorrow my older son returns from his business trip. I will have both my sons home! I am going to kill the fatted calf and celebrate having both my sons under the same roof again! I am so happy we will all be together again I won’t be able to tell if I am eating streak or eating soup, but what better way to celebrate than having both my sons together under the same roof again!

I am heartbroken again! This time it was my oldest son who tore my heart apart. When he got home and saw the celebration he refused to come inside. Then he tells me, ‘All these years I’ve slaved for you and never once refused to do a single thing you told me to. And in all that time you never gave me even one young goat for a feast with my friends. Yet when this son of yours comes back after squandering your money on prostitutes, you celebrate by killing the fattened calf!”

How those words tore my heart apart! All this time I comforted myself with the thought that my older son stayed with me because he loved me as much as I loved him, only to find out he did not love me at all. He was trying to earn something instead. A silly goat! A calf? We could have had either one of those on his last birthday, but I thought the important thing was that we were together. That we loved one another. All these years he served under my house I never cared what we were eating so long as we were together and had each other. Tonight I found out he was not serving me because he loved me like I love him. He was hoping to get some kind of reward out of it instead. I found comfort in my older son when the younger son took his inheritance and left me, showing he only cared about my possessions and not our time together. Well tonight I found out my older son feels the same way towards me. All this time he never cared about our precious moments together. All those years I thought he was serving me because he loved me, when in reality it wasn’t about me at all. It was about some silly calf!

It’s like my oldest son was never even here. His heart was never with me. It was with all my possessions. he was sleeping right under my roof while his heart was as far away from me as his brother was.

Do any of my children truly love me? Can any of them look past the inheritance and my goats and calves, and love their father who loves them more than anything he owns?