↓
Home→Daily→Tuesday: The Law as Our “Guard” 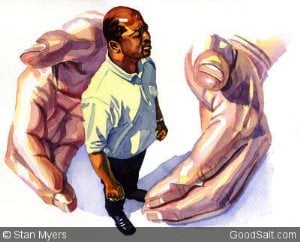 What role does the law actually play then? Paul writes that it was added “because of transgressions” (Gal. 3:19), and he expands on this idea using three different words or phrases in connection to the law: kept (vs. 23), shut up (vs. 23), and schoolmaster (vs. 24).

Read prayerfully and carefully Galatians 3:19–24. What is Paul saying about the law?

While Paul can speak about the law in negative terms (Rom. 7:6, Gal. 2:19), he also has many positive things to say about it (see Rom. 7:12, 14; 8:3, 4; 13:8). The law was not a curse that God placed upon Israel; on the contrary, it was intended to be a blessing. Though its sacrificial system could not ultimately remove sin, it pointed to the promised Messiah who could, and its laws guiding human behavior protected Israel from many of the vices that plagued other ancient civilizations. In light of Paul’s positive comments about the law elsewhere, it would be a mistake to understand his comments here in a completely negative way.

Think of something good that is misused. For example, a drug created to treat a disease could be used by some people to get high. What examples have you seen in your own life of this principle? How does our knowledge of how something good can be misused help us understand what Paul is dealing with here?