↓
Home→Daily→Wednesday: The Law as Our Schoolmaster 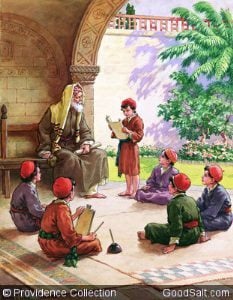 In Galatians 3:23, Paul describes the law as a guarding and protecting force. To what does he liken it in verse 24, and what does that mean? 1

The word translated “schoolmaster” (KJV) comes from the Greek wordpaidagogos. Some versions translate it as “disciplinarian” (NRSV), “tutor” (NKJV),or even “guardian” (ESV), but no single word fully can encompass its meaning. The paidagogos was a slave in Roman society who was placed in a position of authority over his master’s sons from the time they turned six or seven until they reached maturity. In addition to providing for his charges’ physical needs, such as drawing their bath, providing them with food and clothes, and protecting them from any danger, the paidagogos also was responsible for making sure the master’s sons went to school and did their homework. In addition, he was expected not only to teach and practice moral virtues but also to ensure that the boys learned and practiced the virtues themselves.

Though some pedagogues must certainly have been kind as well as loved by their wards, the dominant description of them in ancient literature is as strict disciplinarians. They ensured obedience not only through harsh threats and rebukes but also by whipping and caning.

Paul’s description of the law as a pedagogue further clarifies his understanding of the role of the law. The law was added to point out sin and provide instruction. The very nature of this task means that the law also has a negative aspect, and that’s because it rebukes and condemns us as sinners. Yet, even this “negative” aspect God uses for our benefit, because the condemnation that the law brings is what drives us to Christ. Thus, the law and the gospel are not contradictory. God designed them to work together for our salvation.

“In this Scripture [Gal. 3:24], the Holy Spirit through the apostle is speaking especially of the moral law. The law reveals sin to us, and causes us to feel our need of Christ and to flee unto Him for pardon and peace by exercising repentance toward God and faith toward our Lord Jesus Christ.”—Ellen G. White, Selected Messages, book 1, p. 234.

When was the last time you compared your actions and words and thoughts to the law? Do it now, comparing them not just to the letter of the law but to the spirit, as well (Matt. 5:28, Rom. 7:6). How well do you fare? What does your answer tell you about Paul’s point in this epistle?