Love does no wrong to others, so love fulfills the requirements of God’s law. Romans 13:10 NLT

A young grade-school boy and his daddy were walking down a country road when they noticed a car pull over to the shoulder a few hundred meters up the road. The passenger door opened, and a little puppy fell out the door into the ditch near the shoulder of the road. 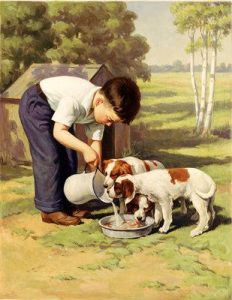 The boy watched in amazement as the car then sped off. The boy ran to the aid of the little puppy. He found the puppy whining and confused, as well as looking malnourished. When the father finally caught up to the boy, the boy firmly told his daddy, “I know you may not let me keep him, but we have to take him home and feed him right now!”

What did the little boy mean by “we have to?” How did an abandoned puppy suddenly became his problem? Was there some law written in stone that the boy had to rescue this poor dog? As a matter fact there was a law, but it was not written in stone. The only reason why the boy said, “we have to” is because there was a law written on that little boy’s heart.

In Luke 10:30-37 Jesus tells a familiar story we call today, “The Good Samaritan.” In the story both the Levi and the priest knew the law of God which was written in stone, but yet they passed by a suffering brother, because that law was not written on their hearts. Then a Samaritan walks by who has the law of love written on his heart. He at once recognized what he had to do, not because of the law written in stone, but because of a law of love tugging at his heart strings. Like puppet strings, his heart strings controlled his behavior.

But this is the new covenant I will make with the people of Israel after those days,” says the Lord. “I will put my instructions deep within them, and I will write them on their hearts. I will be their God, and they will be my people. Jeremiah 31:33 NLT

And you must love the Lord your God with all your heart, all your soul, and all your strength. Deuteronomy 6:5 NLT

“Do not seek revenge or bear a grudge against a fellow Israelite, but love your neighbor as yourself. I am the Lord. Leviticus 19:18 NLT

True justice must be given to foreigners living among you and to orphans, and you must never accept a widow’s garment as security for her debt. Deuteronomy 24:17 NLT

This “letter” is written not with pen and ink, but with the Spirit of the living God. It is carved not on tablets of stone, but on human hearts. 2 Corinthians 3:3 NLT