↓
Home→Feature→Loving Our Neighbors Even When we Disagree

A while back, I was a member of a church that joined other community churches of various denominations in a social justice group. The idea was good. They wanted to help homeless people get cell phones, so they could leave a number on job applications. They wanted buses running later at night for people who work various shifts. My first red flag something was not healthy in the group came before one of our meetings with a city councilman. Our social justice group was instructed by the leader not to applaud or even smile at the councilman until he agreed to all our demands. The message was basically to be ice cold towards him until he does what we want. After we manipulate him, we can make him feel loved and welcomed. To me, this was not social justice. This was bullying! I left the “social justice” group, because it wasn’t very social or just. 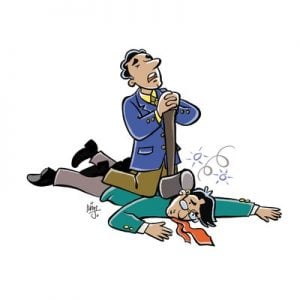 I can’t really condemn the group, because we have all been there. We have all been tempted to not befriend or welcome or even love people if we think we have a just cause against them. The most forgotten commandment may not be the Sabbath commandment after all. It may be, “Love thy neighbor.” As Sabbath keepers we raise our eyebrows at people making excuses not to keep the Sabbath, but how many times do Sabbath keepers make excuses for not loving somebody! I have talked to kindergartners and conference officials who have defended their mistreatment of somebody, justifying it because the somebody did not think or act the way they wanted them to.

This is nothing new. Martin Luther thought he had a just cause for wanting Anabaptists put to death. After all, in his mind they were cutting children off from God by not baptizing them at birth. In his mind Jews were also worthy of death since they rejected Jesus. Luther had a lot of good biblical insights, but even he was tempted by the reasoning that a just cause excuses us from being loving and civil to each other. Luther wanted religious tolerance for himself, because he considered his cause just. But he did not exercise tolerance towards those whose causes he did not consider just.

While the Reformers rejected the creed of Rome, they were not entirely free from her spirit of intolerance. -Ellen White, Great Controversy, Page 293

Do we do the same?

While traveling through Samara, James and John did not like the way Jesus was being rejected, so in their religious zeal they offered to call down fire from heaven and burn those Samaritans up! Like Luther and the rest of us, they had a lot to learn about the love of God. Jesus said,

“You do not know what manner of spirit you are of. For the Son of Man did not come to destroy men’s lives but to save them.” Luke 9:55-56 NKJV

Jesus never condoned sin, but always loved the sinner. Too often we love the sin and hate the sinner!

The same John who wanted to burn up the Samaritans, later realized, “God is love.” 1 John 4:8. Since God is love, I don’t care what you believe or how well you understand the Bible, without love your theology is incorrect! I heard Wintley Phipps say, “Our love for God is no stronger than the love we have for the person we like the least.” And I think he’s right.

Even Martin Luther and John the Beloved needed to learn how to love. Do you think we still need to learn to love? May God help us all to love!