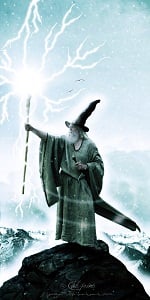 “Manasseh was twelve years old when he began to reign, and reigned fifty and five years in Jerusalem. And his mother’s name was Hephzibah. And he did that which was evil in the sight of the Lord, after the abominations of the heathen, whom the Lord cast out before the children of Israel. …And he made his son pass through the fire, and observed times, and used enchantments, and dealt with familiar spirits and wizards: he wrought much wickedness in the sight of the Lord, to provoke him to anger.” 2 Kings 21:1-2, 6 KJV

It is hard to find a gathering of young people without encountering discussions about fantasy characters. These may be wizards like Harry Potter, a character created by British authoress J. K. Rowling, or Gandalf, the famous wizard from “The Hobbit” and “The Lord of the Rings” by J. R. R. Tolkien, also British. Lest one be tempted to think that it is necessary to have a first initial “J” and be British to write about wizards, there is also the “Twilight” series by American authoress, Stephenie Meyer. The popularity of these characters is evidenced by the fact that all of these authors have become wealthy through the sales of their works.

Subsequent to the mind set that sees a world developed on the foundation of the scientific method, a contemporary view seems to have developed that allows that science is not able to explain all. Those who build on that later foundation often claim to be open to exploration of alternative understandings. Some, although reluctant to embrace a hierarchical model, are nonetheless open to a spiritualized religious universe that embraces the idea of unexplainable fantasy realms where scientific norms and explanations are suspended to allow the flow of alternative energies. Others carry this concept a step further by believing that individuals may be endowed by nature or nurture with the ability to direct these energies for spiritual or magical purposes.

This is not a new concept. Even the Bible contains references to such individuals from thousands of years ago. The description of Balaam, whom Balaak hired to curse Israel, is that of one who used sorceries and divination and is one example from the Old Testament. (See Numbers 22) From the New Testament, we find a sorcerer named Elymas, who challenged Paul. Those who pursue these alternative spiritualities are not portrayed favorably in scripture. This is because then as now, they often align themselves against the monotheistic practices of the Old and New Testaments. In the past, this was a given understood by all. However, in the present response which claims openness to spirituality, hostility to consideration of any spiritual metaphor that includes Christianity remains a powerful undercurrent. For many, the origins of this animosity are lost to antiquity. Like the Palestinians and the Israelis, today, each party knows that the other party is the enemy and can recite a list of injustices perpetrated by one party or the other, but they cannot trace the origin of the conflict back to who struck the first blow.

What is perhaps, also not apparent is how much the different spiritualities have influenced one another. Perhaps we can see evidences of this in the rites and rituals of Christianity. But in order to understand how this can be possible, we must first understand the source. Wizards, sorcerers and diviners strongly believe that if the words of incantations or spells are recited in precise order with correct intonation then the material and spiritual worlds can be bent to their will. Corollary to this is the use of ritualistic objects in a prescribed manner to achieve a similar outcome. Sometimes both are combined for the same purpose.

Even Christians are intrigued and tempted to try these methods. Whether dabbling with Ouija boards or placing a key in a certain place in a Bible, the anecdotal accounts of Christians, especially young people, experimenting with these alternative spiritualities are many. Unlike magic, which is based solely on deception, these forces seem very real and enticing with their promise of supernatural insights. (See Genesis 3:5) But perhaps the greatest danger to modern Christian spirituality is a more subtle influence on the foundational understanding of the Christian faith. Maybe incantations and spells have become integrated into the Christian faith, also.

Many years ago, I had a conversation with a fellow Christian from another denomination about the subject of one of the rites of Christendom. He asked how my denomination performed baptisms. I recounted the process including immersion and the recital of “I baptize you in the name of the Father, the Son, and the Holy Spirit.” (See Matthew 28:19) He became very upset over hearing this. He maintained that we were not properly baptizing because we should be saying “in the name of Jesus” as the Bible says in Acts 2:38. He maintained that unless this was done, the Holy Spirit could not be received. To put it in alternative terms, he felt that if the incantation were not properly performed then the magic could not happen. Unfortunately, some see the rites of the Christian church in much the same way. They see them as little more than magical incantations that will miraculously change evil to good or place supernatural abilities under our control.

Those who feel this way tend to be very concerned that the rites of the church must be performed in an exact manner with no deviation for time and place. The rites are seen as gateways to greater spiritual power. Like my friend, who felt that a precisely performed baptism granted power based on the words recited, some today feel the same. Some may feel that a foot washing service magically grants humility. Others might feel that a baby dedication or a christening service magically changes a secular baby into a Christian one. Still others might feel that a Eucharistic service performed according to ritual grants a magical cleansing. This may also have been the feeling of the ancient Israelites who took their sacrifices to the altar day by day. However, this is not biblical.

Just as now, there was no magical cleansing, only a symbolic reminder of guilt. As Paul wrote to the Hebrews, “The law is only a shadow of the good things that are coming—not the realities themselves. For this reason it can never, by the same sacrifices repeated endlessly year after year, make perfect those who draw near to worship. Otherwise, would they not have stopped being offered? For the worshipers would have been cleansed once for all, and would no longer have felt guilty for their sins. But those sacrifices are an annual reminder of sins. It is impossible for the blood of bulls and goats to take away sins.” Hebrews 10:1-4, NIV

There is a danger in imbuing these symbols with magical significance. The rituals can become ends in themselves. They can become integral parts in a religious worship based more on form than on reality, a works based faith that can never provide remission of sin and guilt. We can create a danger that because we have performed the rites faithfully and precisely according to established practice then we are spiritually “complete.” Like a magical protection, we have the “whole armor of God,” (See Ephesians 6) and we are magically inoculated against evil or falling short of heaven.

This can be a sure formula for disaster for the Christian. When the rites are all performed and the magical protection or favor does not happen, a faith based on these things can become forfeit. We may even blame God for failing to respond to the “magic.” When this happens, it is not God’s fault. We may feel that He has let us down. However, we have created unrealistic expectations in ourselves and others by taking the symbols of our faith and turning them into magical talismans they were never intended to be. This is Hollywood Christianity.

In reality a cross is simply two pieces of wood used to slowly execute criminals during the days of the Roman Empire. But today, Hollywood has transformed it into a magical talisman capable of vanquishing vampires simply by displaying it in their presence. While vampires are not real, many Christians nonetheless wear this symbol of the death of Jesus as though it truly were some kind of magical amulet. Recognizing the irony, the comedian, Lenny Bruce, mused, would Christians be wearing little effigies of an electric chair if Jesus had been put to death as a criminal, today? One might also ask would Hollywood movies then show vampires being turned to dust by these little electric chairs?

Perhaps we develop these understandings because we feel it is easier to try to manipulate the world around us than it is to change ourselves from within. Maybe it is time to move beyond our magical notions regarding the rites and rituals of our faith. Hebrews, chapters three and four, talks about a rest made available to us. In the past that rest was not entered into because of unbelief. Ritual for ritual’s sake will not produce that belief. It comes through a choice to open the heart to the possibility of transformation through relationship with Jesus. Change does come when that happens, and it cannot be manipulated by ritual.