In his second intervention in the story, Paul assured all who were on board—276 people altogether (Acts 27:37)—that, though not everything would come out fine, there would be no casualties; only the ship would go down (Acts 27:22). Fourteen days later, the apostle’s words were fulfilled. 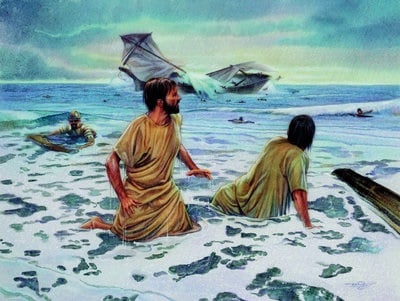 Still under a terrible storm and with the ship completely adrift, the sailors sensed land was near, possibly because they could hear the noise of breakers (Acts 27:27). After a series of soundings, and fearing the ship would be driven against the rocks along the shore, they dropped four anchors from the back of the ship in order to reduce the speed; meanwhile, they desperately asked their gods for daylight to come (Acts 27:28-29).

In the beginning of the journey, the centurion treated Paul well but had no reason to trust the apostle’s nautical judgment earlier in the trip. After two weeks, however, things were different. Paul had already gained the centurion’s respect with his prophetic intervention about the shipwreck (Acts 27:21-26), which was heading now to its fulfillment.

Paul urged the people on board to eat, otherwise they would not have the strength to swim and get ashore. Divine providence does not necessarily exempt us from doing what would normally be our duty. “Throughout this narrative a nice balance is maintained between God’s assurance of their safety and the efforts of the people involved to ensure it.”—David J. Williams, Acts (Grand Rapids: Baker, 1990), p. 438.

As morning approached, the sailors came in sight of land; it was a bay with a beach, where they decided to run the ship aground. The ship, however, never reached the beach. Instead, it struck a sandbar and ended up breaking apart by the force of the waves. The soldiers’ plan to kill the prisoners to prevent them from escaping was stopped by the centurion, mainly because of Paul. In the end, as God had promised, not a single life was lost.