John and James, the sons of Zebedee, were known as the “Sons of Thunder” (Mark 3:17, NKJV). In fact, it was Jesus who gave them their nickname. An illustration of John’s fiery disposition took place when Jesus and His disciples were traveling through Samaria. When they tried to find a place of lodging for the night, they met with opposition due to the prejudice of the Samaritans against the Jews. They were refused even the humblest of accommodations. 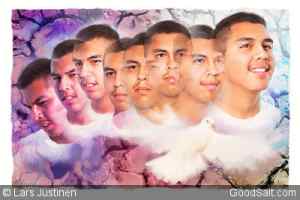 James and John thought they had the solution to the problem. “When His disciples James and John saw this, they said, ‘Lord, do You want us to command fire to come down from heaven and consume them, just as Elijah did?’” (Luke 9:54, NKJV). Jesus rebuked the brothers, and they all left the village quietly. Jesus’ way is the way of love, not combative force.

In the presence of Jesus’ love, John’s impetuosity and anger were transformed to loving-kindness and a gentle compassionate spirit. In John’s first epistle, the word love appears nearly forty times; in its various forms, it appears 50 times.

There is an eternal principle of the universe. Ellen G. White states this principle well in these words: “The exercise of force is contrary to the principles of God’s government; He desires only the service of love; and love cannot be commanded; it cannot be won by force or authority. Only by love is love awakened”. — The Desire of Ages, p. 22.

When we are committed to Christ, His love will shine through us to others. The greatest testimony of Christianity is a changed life. This does not mean we will never make mistakes and that we might at times not be the conduits of love and grace that we are supposed to be. But it does mean that, ideally, the love of Christ will flow from our lives, and we will be a blessing to those around us.