Before they call I will answer; while they are still speaking I will hear. Isaiah 65:24, NIV 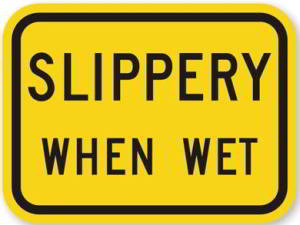 It was a dreary day. The rain had come down in a drizzle that wet everything but didn’t clean it. The country roads were slick and dangerous.

We were returning from visiting relatives one Sabbath afternoon. My stepfather was at the wheel, Mother was sitting in the middle and I was by the window holding my 18-month-old son, Tony, on my lap. It was 1966 when cars had seat belts we sat on and there were no laws concerning car seats for toddlers.

As we came to a curve, my mother read the sign aloud, “Slippery when wet.” My stepfather didn’t slow down. The car started spinning and the door on my side came open. We were tossed around like rag dolls. I only had time to call out, “Oh, God!” Not one to use the name of the Lord lightly, it was a prayer – not an exclamation.

When the car stopped spinning, it turned over on top of Tony and me. We had been partially thrown out and when the car turned back upright, the door was closed with the top of the door bent around my waist. Still holding on to Tony, I reached down, opened the door and got back inside.

A line of cars had stopped, and one of the drivers offered to take Tony and me to the emergency room. Mother rode along. On the way, he said it was a miracle anyone came through the accident alive. He had believed the two of us, at least, would have been killed.

The next several days were spent in the hospital. Besides a “road burn” on his stomach, there was a minor cut close to Tony’s eyebrow and a hole all the way through his cheek. It had taken the doctor a long time to pick out all the gravel and dirt and piece it back together. His eyes were swollen shut the first couple of days and the only time he wasn’t crying was if he was being cuddled by my mother or me.

When the swelling went down, he stood at the end of his crib next to the door and “preached” to people as they walked by. Mother would take him for strolls in the corridor. He was a popular patient with his head swathed in bandages, wearing his little “Seymour” nightgown.

My injuries weren’t major. I had a gash under my chin that required seven stitches. The doctor said he could have closed it with six, but he added one to make it a perfect number. My right hand was torn and bruised, but there were no broken bones. My back was sprained and the muscles were sore for a long time after.

Tony still carries the scar on his cheek. It has faded some but it will always be a reminder that God does answer even the shortest prayer.