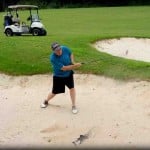 When I first picked up the game of golf over seven years ago, I was excited to get to play with my friend Tom, a buddy from college. I had only been golfing a few weeks when we met one winter on a course in the Chattanooga Mountains. I scored a 137 in the mountains that day and we did not even have time to finish all 18 holes! But five months later, I had been practicing every week on my day off, as well as golfing with my church’s small golf group. I had been going online, reading tips and watching instructional videos. I had even paid for private lessons! After five months of practice, effort and dedication I thought I was beginning to get my game under control. I was excited about meeting my friend Tom for a re-match. I felt confident, as I was more experienced now, and this time we would be on a course that was not in the mountains. I was looking forward to impressing my friend on the golf course.

My confidence went up a notch when Tom told me he had not played since our last meeting five months ago. I thought surely my five months of hard work would pay off. The first hole was a par 4 and I made it in 8. Not exactly what I had planned. Even though I get an 8 every now and then, I was sure I had gotten my “bad hole” out of the way, and I would sail through the rest of the course. Wrong! That day I scored an 8 seven times! On a par 5, I scored a 10! What I had been looking forward to on the entire 9-hour trip up was now turning into a major disappointment! Meanwhile my friend Tom, who had not even played or practiced all year, was cruising along just fine.

The worse I played the more frustrated I got and then I played even worse. I would get frustrated every time I had a bad hit and would yell at myself, “William!” until I realized I did not need to broadcast my name to the entire golf course while playing so badly. We decided that we could do no more than double par. So on one hole that was par 4, 8 would be the maximum number of strokes I could take to make it. I was at stroke number 8 while still in the middle of the fairway, nowhere close to the green yet! I yelled out to Tom across the fairway, “I am in the middle of the fairway and already have 8 strokes!” Only then did I remember that I did not need to broadcast my misfortune to the entire golf world.

On the next fairway I had a great start! I was on track to make par when I hit into a sand trap next to the green. If I could just hit out of the trap onto the green I could still make par. That never happened, as my next 4 strokes never left the sand trap. I was so frustrated I did something I had never done before. I threw my golf club into the sand in disgust! I had planned a vacation and traveled nine hours just to make a fool out of myself! At least I remembered to sincerely congratulate Tom, who easily made par on the same hole. He even mentioned how amazingly easy all of his shots just fell perfectly into place. Hhhmmpphh!! Why me Lord? Why can’t I be like Tom? I try so hard! The whole day was not a complete disaster. Besides enjoying a beautiful day with a long time friend, I did get par on the last hole which was a par 5. In the end though, my friend who has not even been practicing beat me by 16 strokes! I practiced hard for 5 months only to get beat by 16 strokes by someone who had not practiced at all!

I think I hid my frustration well, (besides throwing my golf club into the sand) but was very disappointed that I had nothing to show for all my hard work. Then I remembered reading something in the Spirit of Prophecy years ago. It was to the effect that while some people may have a lot of flaws in their characters, some of them are trying harder to live a Christian life than some of the so called polished Christians. I heard the Holy Spirit speak to me:

“William you are frustrated that Tom saw no evidence of your hard work and effort on the golf course. Meanwhile you are studying and associating with people all around you who are really trying hard to be better Christians, even though it may not look like it to you. Some of the people you get discouraged with are actually putting more effort into their Christian walk than you are putting into yours.”

Then I remembered how easily Tom’s par came to him on the same fairway on which I failed, even though I was trying very hard. I realized what I had experienced on the golf course, many struggling Christians are experiencing in real life. Just like I would try my best to do everything right and make the perfect shot, I was missing the mark by a mile. Likewise, just because people miss the mark in the Christian life does not mean God does not know they are trying, maybe even trying harder than the polished Christians. And He accepts their efforts.

I got the message. I decided that, instead of being discouraged over my nightmare on the golf course, I would use this experience as a reminder to be patient with others who are making all kinds of mistakes in life. Just like I wished my golf buddy could have looked past my three-digit score, and seen into my heart, and known what I was actually trying to accomplish, I will assume that those around me are trying harder to be a Christian than it may appear to me.

When I got home I looked for and found the quote I was thinking about earlier. Here it is from in the chapter called, “Love for the erring.” I recommend reading the entire chapter!

“While some are continually harassed, afflicted, and in trouble because of their unhappy traits of character, having to war with internal foes and the corruption of their nature, others have not half so much to battle against. They pass along almost free from the difficulties which their brethren and sisters who are not so favorably organized are laboring under. In very many cases they do not labor half so hard to overcome and live the life of a Christian as do some of those unfortunate ones I have mentioned.” Ellen White, Testimonies Volume 2 page 74