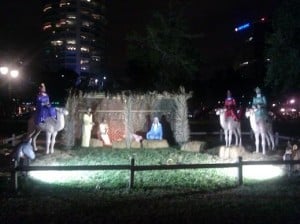 Jesus was born in Bethlehem in Judea, during the reign of King Herod. About that time some wise men from eastern lands arrived in Jerusalem, asking,  “Where is the newborn king of the Jews? We saw his star as it rose, and we have come to worship him.” King Herod was deeply disturbed when he heard this, as was everyone in Jerusalem.  He called a meeting of the leading priests and teachers of religious law and asked, “Where is the Messiah supposed to be born?” “In Bethlehem in Judea,” they said, “for this is what the prophet wrote:‘And you, O Bethlehem in the land of Judah,  are not least among the ruling cities of Judah, for a ruler will come from you who will be the shepherd for my people Israel.’ Matthew 2:1-6 NLT

Strange that the priests and teachers knew the Scriptures concerning the advent of the Messiah, yet they were not leading out in a revival to prepare for His coming. They were totally silent about it until asked by the gentiles who seemed more aware and interested than they were.

Why do you think the wise men from the East were more vocal and active concerning Christ’s coming than the priests and teachers were? Maybe the priests and teachers did not want to offend the Romans or their king and stir up persecution? Maybe they did not want the people to be worshiping anyone besides themselves? Or maybe even though they were religious leaders, they were just too caught up with their standing and position in the world to care about a Savior coming to set men free from sin.

The New Testament teaches the priesthood of all believers. As a priest of Christ are you preparing others for His second coming? If not, could any of these reasons be keeping you back? Let’s not be so enthralled with everything around us that we forget why we exist.