↓
Home→Feature→Obedience is the Only Acceptable Expression of Respect

When I tell one of my students at school to clean the dry-erase board, he does not come up to me several minutes later saying, “I memorized what you told me to do.” Memorizing is not the goal. Obedience is the goal. This is why I find this week’s Sabbath School lesson so crucial. It stresses the importance of not only understanding or even memorizing the Bible but actually doing what it says. I know people who show great respect for the Bible by not placing anything on top of it or by not setting it on the ground, treating it much the way we do our nation’s flag. This is commendable, but I believe and I’m sure you do too, that the greatest way to show respect for God’s Word is to do what it says. Not stacking things on top of the Bible or not letting it touch the ground is meaningless if we are not doing what it says. After all, what traitor could stand before a judge and say, “Sure I traded military secrets to the enemy, but I never let the flag touch the ground.” Treating the flag with respect is meaningless if we are betraying the nation it represents. 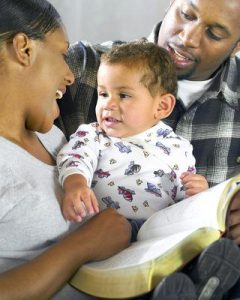 Today when writing even a pronoun for God like “He” and “Him,” we capitalize the pronouns referring to God out of respect. However you may have already noticed that in the Bible the pronouns for God are not capitalized. What gives? Did the Bible translators have no respect for God and His holiness? No, they had great respect for God, but they realized that the best way to show respect for God is to do what He says, and not just simply write His name with capital letters. After all, writing pronouns referring to God with capital letters is quite hallow if we are not exhibiting the greatest form of respect which is obedience.

Nowhere in Scripture does it tell us not stack anything on top of the Bible or make sure we write pronouns referring to God with capital letters. Nowhere in Scripture are we told the importance of merely memorizing Scripture if we are not prepared to actually  do what it says. In Luke 10 a lawyer engages Jesus in a theological discussion regarding the law and salvation. Jesus commends the lawyer for his theory on theology. But even as Jesus commends his theory as being theologically correct, He also lets him know more than head knowledge and theory is required.

Jesus was not satisfied with theological head knowledge. Jesus wanted the lawyer to do what the law says. Jesus then illustrates His point with the story of the good Samaritan, who practiced loving his neighbor. The Samaritan was doing in the story what the lawyer was only talking about. At the end of the story Jesus reiterates the importance of doing what the law says instead of just studying and memorizing the law.

A few years ago I was a part of a discussion where someone was saying that we don’t need to obey the health and temperance principles in the Bible. We only need to call upon the name of the Lord and we will be saved. He referenced Romans 10:13. I agreed that Romans 10:13 does indeed say those who call upon the Name of the Lord will be saved, but we can’t call Jesus “Lord” if we are not obeying Him. Matthew 7:21-23 makes it clear that we are calling on the name of the Lord in vain if we are not obeying His laws. After all obedience is the result of salvation.

Work hard to show the results of your salvation, obeying God with deep reverence and fear. Philippians 2:12 NLT

When Jesus was at the wedding party with His mother, and they ran out of wine, His mother told the servants something extremely simple but equally  profound.

Many years ago I was the guest speaker at a church where a family had just lost a child. The pastor explained to me that they would take up an offering for the family to help with funeral expenses and assured me they would still take up the customary offering to cover my expenses traveling to their church. When the plea was made for the family’s offering someone testified how poor the family was. I perceived the Holy Spirit nudging me to tell the pastor sitting on the platform with me to collect all of the money for the family  and not to take up an offering for me. I sat there a few moments considering what I felt the Holy Spirit telling me. Did I have the money to pay for this trip myself? Then I perceived the Holy Spirit speaking to my conscience again, “What is there to think about or consider? I just told you what to do!” I then leaned over and whispered in the pastor’s ear to forget about my offering and give it all to the family. I never missed the money I would have received that day. More importantly I did what I knew God was telling me to do.