My parents tell me that one Sabbath morning when I was two years old, the elder kept praying and praying in church, and I got tired of kneeling on my two-year-old little knees, so I finally stood up on the pew and started shouting, “Amen! Amen! Amen!” 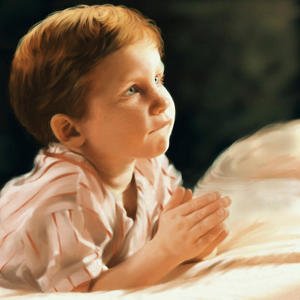 Even at two years old I must have realized that public prayers are supposed to be brief. Well, let me tell you something, I have felt like doing that a few times since then.

In recent years I have been kneeling in congregational prayer for what felt like an eternity, and have thought to myself during the long drawn-out prayer, “Why doesn’t the elder praying just ask the pastor if he can preach sometime. I’m sure he would let him, and then the elder wouldn’t have to use prayer time to preach a sermon.”

Jesus mentored His disciples to pray longer prayers in private. In Gethsemane the night of His arrest, in Matthew 26:36-46, He even asked them to pray for Him. Jesus led by example, in long personal prayers, sometimes lasting all night (Luke 6:12). He also taught that prayers should be genuine and not rehearsed.

“When you pray, don’t babble on and on as people of other religions do. They think their prayers are answered merely by repeating their words again and again.” Matthew 6:7 NLT

Many times in my Bible studies I ask people to have the opening prayer, and many are shy and say they don’t know how. I never pressure anyone to do anything they don’t feel comfortable doing, but several have been surprised how easy it is when I tell them how. One man, who had already heard me pray many times, told me he wanted to pray but did not know what to say. I told him, “Just say “Dear heavenly Father, please send your Holy Spirit to be with us in this Bible study. In Jesus’ name, amen.” His eyes opened wide and he smiled when he realized how easy it was.

God wants us to talk to Him as a friend. He does not wanting us just babbling the same words over and over. He wants to have a real conversation with us. The psalmist talks about singing a new song (Psalms 40:3) and a song is like a prayer, since songs and prayers are stories of our experiences. Just as God enjoys new songs, He also enjoys new prayers.

While Jesus mentored His disciples to pray in private, He also mentored them to pray in public. He gave them a model prayer, not to be repeated over and over word for word, but as a model for us to form our own prayer. God loves creativity. Not every song has to be sung the same way and neither does every prayer have to be prayed the same way. While Jesus prayed long private prayers, notice how short His public prayer is.

Our Father in heaven, may your name be kept holy. Matthew 6:9 NLT

Jesus starts by addressing His Father and setting a tone for reverence and awe. Our prayers may also be prayed with confidence knowing our requests are reaching the throne of the universe.

May your Kingdom come soon. May your will be done on earth, as it is in heaven. Matthew 6:10 NLT

I have a friend who was taught long ago by his parents to always ask people how their day was, and listen to them, before going on about yourself and your day. You may think you had a tough day, but before you dive into your prayer, telling God all about your heartaches, have you ever asked God how His day went? God sees way more heartaches in one day than we will see in a lifetime. We want God’s will to be done and His kingdom to come soon, not just to end our suffering, but to end God’s suffering, as He suffers not just with you and me, but with everyone in the world who suffers.

Give us today the food we need, Matthew 6:11 NLT

When Daniel asked for God to reveal the king’s dream to him, Daniel did not save himself only, he saved the lives of all the king’s men (Daniel 2:24). In Mark 4:39 Jesus calms the storm at the disciples’ request, but the sea was not only calmed for their tiny boat. All the other boats on the water benefited from the calmness. Jesus does not pray for Himself alone to have food. He prays for everyone to have the food they need. There is no selfishness in Jesus’ prayer. There is no selfishness in any genuine prayer.

“and forgive us our sins, as we have forgiven those who sin against us.” Matthew 6:12 NLT

Jesus could have prayed, “Father forgive everyone else for their sins, but as you know, I have never sinned,” but again there is neither self nor pride in Jesus’ prayer.

And don’t let us yield to temptation, but rescue us from the evil one. For yours is the kingdom and the power and the glory forever. Amen. Matthew 6:13 NLT

Jesus overcame by asking for the Father’s help along with everyone else. We can ask for His help and overcome as well. Jesus ends His prayer the way He began, by exalting the Father, Who gives us the confidence we need in our personal lives and ministry when we worship and follow Him.

May His will be done, and may it begin with us.