In this week’s lesson on the Son of David I originally planned to focus on the character of Joseph, since he is often marginalized in our discussions of the incarnation of Christ. Mary rightly draws our attention, as it was she who actually carried to birth the long-awaited Messiah. But it was the lineage of Joseph that the prophecies of old had foretold. 1 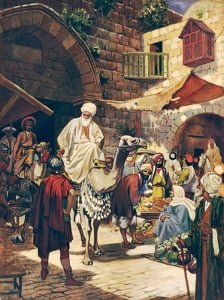 “And there shall come forth a rod out of the stem of Jesse, and a Branch shall grow out of his roots” Isaiah 11:1

Matthew records that Joseph was a just man. That one sentence contains a wealth of insight into his character. In a time that could best be described as a crisis, Joseph showed the kind of man he was.

The Bible doesn’t comment on how Joseph was made aware of Mary’s pregnancy. I can’t begin to imagine how such a conversation unfolded. My guess is that he knew Mary to be a woman of integrity and this factored into his response.

Then Joseph her husband, being a just man, and not wanting to make her a public example, was minded to put her away secretly. Matthew 1:19

I’m convinced Joseph believed what Mary told him, but for some reason felt it best to give her a letter of divorcement. He would use the most discreet method available to end their union. He did not have to take that route. There were more drastic and public actions he could have taken.

It speaks volumes of a man who never loses sight of the other person’s value in times of a schism in the relationship. It’s a principle we would do well to adopt, not just in differences of opinion but even outright wrongdoing.

“And above all things have fervent love for one another, for “love will cover a multitude of sins.” 1 Peter 4:8

Being just – guided by truth, reason, justice, and fairness, is sorely needed both in the world and in the church. We need more men and women like Joseph who are sensitive and responsive to the delicacies of life. We need more that will, as far as possible, shield others from unnecessary embarrassment and pain.

Even as we take in the lessons from Joseph’s approach to Mary’s divine pregnancy, we are led into a much larger truth. As Joseph had decided in his mind how he would deal with the news, he had a dream that would change everything.

“But while he thought about these things, behold, an angel of the Lord appeared to him in a dream, saying, “Joseph, son of David, do not be afraid to take to you Mary your wife, for that which is conceived in her is of the Holy Spirit. And she will bring forth a Son, and you shall call His name Jesus, for He will save His people from their sins.” Matthew 1:20-21

God always has a plan for the greatest difficulties we face

What makes no sense to mortal man is but a perfect piece in the jigsaw puzzle of life. Beneath the surface in Matthew’s history is more evidence on how God can take something bad and use it for good. In the lineage of Jesus we find a wide range of people both good and bad. There are good kings as well as bad. There are people of integrity as well as people of ill repute. And certainly none could have imagined how the twists and turns of their lives would play into that moment of history for Joseph and Mary.

I am struck by how often the big issues of life overwhelm us. More often than we care to admit we become despondent at the downturns of life. The sense of being alone with no satisfactory recourse is an unenviable position to be in. In the darkness of despair our soul’s cry out My God why have you forsaken me?

Although through our tears and confusion we cannot see Him, He is there. His consistent message to us is “Trust Me,” especially during those times of utter darkness we all face.

As we begin this study of the book of Matthew we will rediscover and be reminded that God has not changed. His love and compassion has not been exhausted. His guidance in our lives during those times that are unexplainable, is still trustworthy.

Our task is to live in such a way that we can hear His voice. The busyness of life can often drown out His voice. Sins we once shunned, if we are not careful, can become a routine way of life. We must remain vigilant and keep His written Word as our close companion for through it He still speaks to humanity.

This quarter let’s redouble our efforts to “study to shew thyself approved unto God, a workman that needeth not to be ashamed, rightly dividing the word of truth.” 1 Timothy 2:15

We close this week’s lesson with words of instruction that are as sound as the day they were recorded.

He hath shewed thee, O man, what is good; and what doth the Lord require of thee, but to do justly, and to love mercy, and to walk humbly with thy God? Micah 6:8

Until next week, let’s all continue to Hit the Mark in Sabbath School.