There are some pretty strange laws out there.

In Oklahoma it is against the law to spit on the sidewalk. I’m not sure what the penalty is. I do know that the penalty for making an ugly face at a dog is a fine or jail sentence. I guess the sentence depends on just how ugly a face you make. 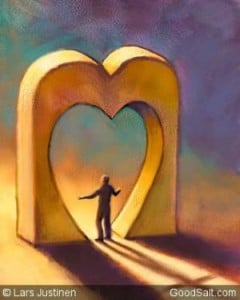 In Texas it is against the law to milk another person’s cow, or to shoot a buffalo from the second floor of a hotel. In Alaska it is considered an offense to shove a live moose out of an airplane.

While these laws sound pretty crazy, if we searched the history behind them, some of them might start to make sense. For example, someone at one time in Alaska must have tried to shove a moose out of an airplane. Spitting on the sidewalk may seem innocent enough, until your ten-year-old son walks barefoot down a sidewalk after a man with a hacking cough just passed by! Making an intimidating face at a dog that brings it to the point of violent frustration is not very considerate either. So we have come up with millions of laws, some of them quite bizarre, just because there are people out there who have no consideration for others.

In heaven Lucifer rebelled against God’s law of love. He thought a lawless society would be better. Well, guess what? The more lawless a society becomes, the more laws it needs.

The Spirit of God’s law is simple:

Judging by the way he behaved towards innocent creatures, Lucifer must have thought being considerate of your Creator and His created beings was too much to ask for. Not true. If we had always respected our Creator and His creatures we would not need the millions of strange laws we have today. If we loved others and were thoughtful of their needs, we would not need a law book at the courthouse telling us we can’t spit on the sidewalk or take milk from our neighbor’s cow. Likewise if we would just love our spouses we would not need divorce laws, alimony laws, child custody laws, child support laws or restraining orders.

I don’t think that it’s strange lawmakers who create strange laws, but rather strange and selfish behavior that is their source. In the Old Testament are laws that some people find strange. For example, why did God have to give this command in Leviticus 20:2?

If parents would have just been faithful to their children we would never have needed this law. It is not God who was strange, thus requiring a strange law but rather a strange society that was the cause. Strange and unnatural laws are necessary for a society that does not have natural love. The laws created by natural love are simple and brief, written on our hearts so that obeying them comes naturally.

God’s law could be as simply stated this, “Have a heart, people!” And with that one simple law being accomplished we would need no other law, for having a heart for God and his creatures would make laws about offering your children to Molech and shooting buffalo from the second floor of a hotel totally unnecessary.