Read Daniel 5:1-4 along with Daniel 1:1-2. What is Belshazzar doing that is so bad? How does it reveal his true character? Compare his actions with Revelation 17:4-6. What parallels can you find?

The king commands that the sacred utensils of the Jerusalem temple be used as drinking vessels. Nebuchadnezzar seizes the vessels from the Jerusalem temple, but he places them in the house of his god, which shows that at least he respects their sacred status. 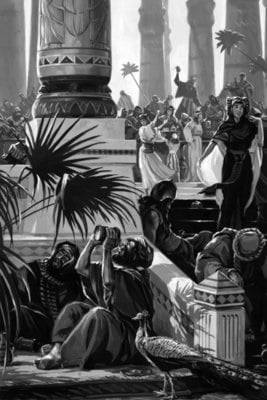 But Belshazzar turns the sacred vessels into drinking utensils in a most profane way.

While drinking from the sacred vessels, Belshazzar’s lords “praised the gods of gold and silver, bronze and iron, wood and stone” (Dan. 5:4, NKJV). It is worth noticing that six materials are mentioned. The Babylonians used the sexagesimal system (a system based on the number 60) in contrast to the decimal system used today (based on the number 10). Thus, the six categories of gods represent the totality of the Babylonian deities and, therefore, the fullness of the Babylonian religious system. Interestingly enough, the order of the materials follows the order of the components of the dream statue of Nebuchadnezzar, except that wood replaces the clay. As in the dream, stone appears last; although here it designates the material composition of idols, stone also evokes God’s judgment upon worldly empires (see Dan. 2:44-45), which Babylon symbolizes.

This feast serves as an apt representation of end-time Babylon as seen in the book of Revelation. Like Belshazzar, the woman in end-time Babylon holds a golden cup and offers polluted drink to the nations. In other words, by means of false doctrines and a distorted worship system, modern Babylon lures the world into evil (Rev. 17:4-6), oblivious to the judgment that will soon fall upon her. One day judgment will come.