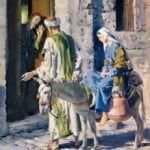 At that time the Roman emperor, Augustus, decreed that a census should be taken throughout the Roman Empire.  (This was the first census taken when Quirinius was governor of Syria.)  All returned to their own ancestral towns to register for this census.  And because Joseph was a descendant of King David, he had to go … END_OF_DOCUMENT_TOKEN_TO_BE_REPLACED