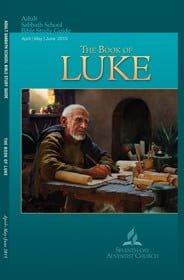 And he arose, and came to his father. But when he was yet a great way off, his father saw him, and had compassion and ran, and fell on his neck, and kissed him” (Luke 15:20).

We know that verse. It comes from one of the most well-known and beloved stories in all literature, sacred or mundane. Astonishingly enough, we would never have heard it but for a simple missionary doctor who embedded that precious gem in a letter he wrote to his learned friend Theophilus.

The doctor’s name is Luke, a Gentile convert, and the letter is The Gospel According to Luke. In addition to the Gospel, Luke also wrote the book of Acts. Having been a travel companion of Paul, Luke was a keen observer of, and participant in, the great Jesus movement sweeping the Roman Empire. This close association with Paul led Luke not only to grasp the profound meaning of the Christian church—which stood its ground against Caesar’s demand to be honored as divine—but also to learn more deeply from credible sources about the Man behind it all: Jesus Christ. So, under the inspiration of the Holy Spirit, Luke wrote a two-volume work on what could be called Origin and History of the Christian Church.

Part 1 of this work is the Gospel, written and delivered to Theophilus before Acts was written (Acts 1:1). Many conservative scholars date Luke’s Gospel to about A.D. 61–63.

Theophilus was a Greek convert, and in addressing the letter to him, Luke was especially conscious of directing his Gospel to the Greek and Gentile members of the community of faith, while not disregarding the Jewish roots of Jesus. Matthew wrote primarily to the Jews, and so he emphasizes Jesus as the Messiah. Mark wrote to the Romans, and we see Jesus marching across the land with the news about the kingdom. John was a deep thinker, and in his Gospel emerges Jesus the Word, the Creator, the Son of God. But Luke writes with an eye on the Gentiles. To them he presents Jesus, the Son of man, as the Savior of the world and Friend of humanity. The universality of salvation is the underlying theme of his Gospel; so, his genealogy traces Jesus all the way to Adam and links him to God, while Matthew’s genealogy stops with Abraham, the father of the Jews (Luke 3:23-38; compare with Matt. 1:1-17).

Under the guidance of the Holy Spirit, Luke claims to have surveyed the historical materials, interviewed the eyewitnesses (Luke 1:2), and then with perfect understanding of all things written an orderly account that the reader(s) may know the certainty of Jesus and His good news (vss. 3, 4, NKJV).

When asked if he would recommend a good biography of Jesus, the great theologian James Denney replied, Have you tried the one that Luke wrote?

Good idea. Let’s try it together, as a world church, this quarter.

John M. Fowler has served the church for 53 years as pastor, theology and philosophy teacher, editor and educational administrator. As author of numerous articles and books, he has written two Adult Sabbath School Bible Study Guides: The Cosmic Conflict Between Christ and Satan (2002) and Ephesians: The Gospel of Relationships (2005).

See the Index of The Book of Luke Lessons.