I’m writing this week’s post from Rome, the ancient city whose past intersects with the life of Paul. It was from Rome that Paul penned the letter to the church in Galatia. Unlike myself and my wife, Paul was not in Rome by his own choice. His presence there was due to the conflicts he endured as a faithful follower and promoter of Jesus Christ. 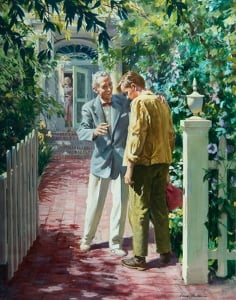 Yet, even in the midst of his own life-threatening predicament, Paul’s concern was for the members of the churches scattered about. This week’s lesson, The Gospel and the Church, focuses on Paul’s words of wisdom on how to deal with fellow members who have succumbed to sin.

“Brethren, if a man is overtaken in any trespass, you who are spiritual restore such a one in a spirit of gentleness, considering yourself lest you also be tempted.” Galatians 6:1

Rather than isolating Paul’s instructions as a go-to guide for church conduct, I find it more helpful to understand the bigger picture. Paul was writing to a church in crisis. The dissension caused by those of the circumcision was leading to a loss of compassion and love. This had to be addressed.

I hear in the words of Paul a principle that would serve all of us well. When thinking about other Bible examples to describe it, I thought of David before he was king.

David was living on the run from King Saul. For protection, he had taken refuge with King Achish, the king of the Philistines. 1 Samuel 29 records the story of an impending battle between the Philistines and the Children of Israel during that time.

David is providentially removed from having to fight for or against his own people and when he and his men returned to Ziklag, they found it burned and all of the women and children taken by the Amalekites.

1 Samuel 30 tells of the heroic efforts David and his men made to rescue their families. So focused were they on getting to their people that 200 of his men of war were too exhausted to make it to where the Amalekites were camped.

After a victorious rout, David and the men with him retrieved their families and more. I want to focus on the scene when they victoriously returned to camp. Many of those that actually fought did not want to share the bounties with those who remained behind. Common logic would say that they were less deserving. David’s response to this is crucial.

“But David said, “My brethren, you shall not do so with what the Lord has given us, who has preserved us and delivered into our hand the troop that came against us. For who will heed you in this matter? But as his part is who goes down to the battle, so shall his part be who stays by the supplies; they shall share alike.” So it was, from that day forward; he made it a statute and an ordinance for Israel to this day.” 1 Samuel 30:23-25

David knew that unity was vital. They were all in it together. Their existence as a cohesive unit would not be based on a points system. Everyone’s role, whether on the front line or not, mattered. And for the good of everyone, no one would be thought of as less deserving.

He is urging them as a loving father, to keep the main thing the main thing. Their thrust in life was to be one of continual, sincere expressions of love and kindness.

“Therefore, as we have opportunity, let us do good to all, especially to those who are of the household of faith.” Galatians 6:10

With all of the calamities throughout our world today, we too need to heed the instruction of keeping the main thing the main thing. Political ideologies, racial preferences, class conflicts, and self-centeredness are pulling the fabric of our world apart. The church – the people who are the church- must strive to be free from those influences that would separate us.

In another letter, Paul urges this same attention to rescuing and not condemning, with a goal of uniting and not dividing.

“Therefore, if anyone is in Christ, he is a new creation; old things have passed away; behold, all things have become new. Now all things are of God, who has reconciled us to Himself through Jesus Christ, and has given us the ministry of reconciliation.”  2 Corinthians 5:17-18

We close this week’s lesson with another verse from our study. I encourage you to keep aiming high.

“And let us not grow weary while doing good, for in due season we shall reap if we do not lose heart.” Galatians 6:9