↓
Home » The Messiah in Prophecy

Several years ago, I was showing a set of Christian books to a lady. There were several hardbound books in the set, which also included beautiful art work. The lady loved the books, and asked how much they were. I told her, “Four-twenty-nine.” She was delighted, and exclaimed, “Is that all!” I said, “Yes.” I  went on to explain the payment plans, of cash, credit card, or down payment of 15% and then 12 monthly payments. She looked confused, and then disappointed when she realized, that by four-twenty-nine I meant $429.00 and not $4.29.

The lady was like most all of us. We hear what we expect to hear. We read the Old Testament Prophecies that depict Jesus’ sacrifice, like Isaiah 53, and wonder why the Jews did not understand that the Messiah was coming to die for our sin and not set up an earthly kingdom.

The Jews were looking for a Savior from Roman tyranny because they read  prophecies, such as Isaiah 52:13, “Behold, my servant shall deal prudently, he shall be exalted and extolled, and be very high.” And also Isaiah 9:7, “Of the increase of his government and peace there shall be no end, upon the throne of David, and upon his kingdom, to order it, and to establish it with judgment and with justice from henceforth even for ever.” They thought Jesus would come and set up an earthly kingdom. Would we have thought differently? 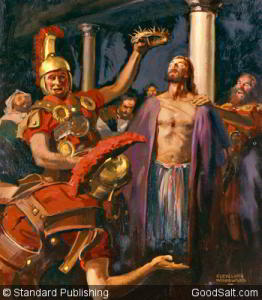 Even the disciples misunderstood and heard only what they expected to hear. Jesus told them in Matthew 16 among other places, that He would be crucified, but Peter and the others simply refused to hear of it. The weekend of the crucifixion they were devastated. It was a great disappointment.

There was nothing wrong with the prophecies. The prophets were right on. The Jews, the disciples, the lady I was trying to sell  books to were all just like us. We hear what we expect to hear.

Some scoff at them for not knowing better, but are we any better than they are? Do we not make similar mistakes?

Jeremiah 23:6 promises to save the kingdom of Judah. “In his days Judah shall be saved, and Israel shall dwell safely: and this is his name whereby he shall be called, THE LORD OUR RIGHTEOUSNESS.” This led the people to dream of a kingdom prosperous and above all others. However the text also promised righteousness for the people.  It seems the people were not so interested in the righteousness as they were in the prosperity. That is just like us today. In Matthew 6:33 Jesus says,” But seek ye first the kingdom of God, and his righteousness; and all these things shall be added unto you.”

Could we today be like the children of Abraham, dreaming only of prosperity, and forgetting that God once asked father Abraham to sacrifice his son and future prosperity?

When Paul was reasoning with the Jews, showing them that Jesus was the Messiah, he had his work cut out for him. Below is a study on the Messiah, showing the prophecies predicted in the Old Testament, and their fulfillment in the New Testament. Paul probably used some of these Scriptures when he taught the Jews about the Messiah.

At the crucifixion the disciples were devastated and hurting. Jesus  looked past the mistakes of His disciples and saw the pain. On the road to Emmaus, he took pains to demonstrate to them from the Scriptures that His life had fulfilled the Old Testament prophecies. He probably used some of these Scriptures as well.

Greater yet, it affirms our faith that He will come the second time, just as the Bible promised He would come the first time. There are actually twice as many Bible promises about His second coming than there are about His first coming.