↓
Home→Feature→The Most Precious Gift of All

The night my mother was dying, I made an emergency flight to get out to see her. Problem was, my connection flight, in Love Field in Dallas, arrived several hours late, due to a tornado in Amarillo, where it was coming in from. I arrived home in Tulsa at 1:30 in the morning. I had an old friend from grade school scheduled to pick me up and take me to the hospital, when the plane was still scheduled to arrive on time. Even though it was a weeknight, with regular activities scheduled the next day, she insisted on still picking me up in the middle of the night, and driving me across town to the hospital, where I saw mom just hours before she passed away. Who would have ever dreamed, forty years earlier, when we were back in grade school, that one night, even while living 1200 miles away, my friend would be there to help me in the middle of my worst night ever?

That night my friend gave me the most precious gift in the universe, which was time. She gave her time in the middle of the night, which gave me one more time with my mother before she fell asleep.

One night, when I first got to Tampa, I was doing Bible work on the south end of town, when my car broke down. A friend who lived nearby, who had to to work in the wee morning hours drove over and cheerfully helped me get my car fixed. Another case of a friend sacrificing his time for me. 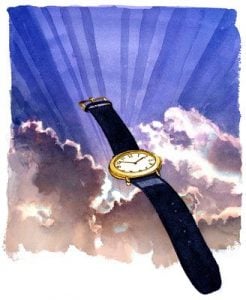 When we talk about stewardship we think mostly of money and possessions. However if you think about it, time is the most precious commodity we can share. Time is the substance of life. When we give someone our time, we are literally giving them our life!

As if that was not important enough, time is also money. A family may not be able to give $500.00 a month to the church, but they can give their time to clean the church, and save the church from spending $500.00 on a janitor, which in turn is the same as giving $500.00.

When I lived in the Dallas area, there was a sports coach who was a little rough around the edges and wasn’t the most popular celebrity in the community. After he resigned, a lady wrote in to the newspaper to express her appreciation for the coach. She had attended a social gala with several area celebrities. She brought her 9-year-old son who had a rare disease. She wrote that several of the celebrities patted him on the head, and then went on to their hobnobbing with the other celebrities, but the coach sat down with him and talked to him for over 30 minutes! The coach’s time with her son meant the world to the mother!

While we study stewardship this quarter, lets remember time is the most precious gift we have to share.