Is it too early to think about what we shall do with Christmas next year? Perhaps not, because it takes time to change ingrained thinking, and some of us may need a year to change our pattern of thought.

I. What Is Christmas?1 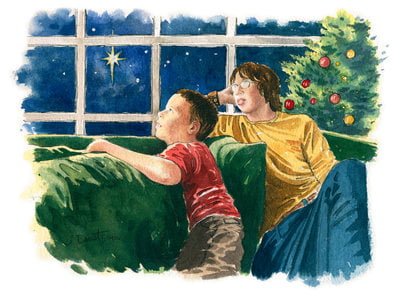 Christmas is coming,” is the note that is sounded throughout our world from East to West and from North to South. With youth, those of mature age, and even the aged, it is a period of general rejoicing, of great gladness. But what is Christmas, that it should demand so much attention? This day has been made much of for centuries. It is accepted by the unbelieving world, and by the Christian world generally, as the day on which Christ was born. When the world at large celebrate the day, they show no honor to Christ. They refuse to acknowledge him as their Saviour, to honor him by willing obedience to his service. They show preference to the day, but none to the one for whom the day is celebrated, Jesus Christ.

The twenty-fifth of December is supposed to be the day of the birth of Jesus Christ, and its observance has become customary and popular. But yet there is no certainty that we are keeping the veritable day of our Saviour’s birth. History gives us no certain assurance of this. The Bible does not give us the precise time. Had the Lord deemed this knowledge essential to our salvation, he would have spoken through his prophets and apostles, that we might know all about the matter. . . .

There is no divine sanctity resting upon the twenty- fifth of December; and it is not pleasing to God that anything that concerns the salvation of man through the infinite sacrifice made for them, should be so sadly perverted from its professed design. Christ should be the supreme object; but as Christmas has been observed, the glory is turned from him to mortal man, whose sinful, defective character made it necessary for him to come to our world.

III. The Wonderful Theme of the Incarnation

Jesus, the Majesty of heaven, the royal King of heaven, laid aside his royalty, left his throne of glory, his high command, and came into our world to bring to fallen men, weakened in moral power, and corrupted by sin, aid divine. He clothed his divinity with humanity, that he might reach to the very depths of human woe and misery, to lift up fallen man. By taking upon himself man’s nature, he raised humanity in the scale of moral value with God. These great themes are almost too high, too deep, too infinite, for the comprehension of finite minds.

IV. The Gift Season for God’s Cause

Parents should keep these things before their children, and instruct them, line upon line, precept upon precept, in their obligation to God,—not their obligation to each other, to honor and glorify one another by gifts and offerings. But they should be taught that Jesus is the world’s Redeemer, the object of thought, of painstaking effort; that his work is the grand theme which should engage their attention; that they should bring to him their gifts and offerings. Thus did the wise men and the shepherds.

V. A Day of Gladness and Rejoicing

As the twenty-fifth day of December is observed to commemorate the birth of Christ, as the children have been instructed by precept and example that this was indeed a day of gladness and rejoicing, you will find it a difficult matter to pass over this period without giving it some attention. It can be made to serve a very good purpose. The youth should be treated very carefully. They should not be left on Christmas to find their own amusement in vanity and pleasure-seeking, in amusements which will be detrimental to their spirituality. Parents can control this matter by turning the minds and the offerings of their children to God and his cause and the salvation of souls.

VI. Not to Be Ignored With Children

The desire for amusement, instead of being quenched and arbitrarily ruled down, should be controlled and directed by painstaking effort upon the part of the parents. Their desire to make gifts may be turned into pure and holy channels, and made to result in good to our fellow-men by supplying the treasury in the great, grand work for which Christ came into our world. Self-denial and self-sacrifice marked his course of action. Let it mark ours who profess to love Jesus; because in him is centered our hope of eternal life.

Youth cannot be made as sedate and grave as old age, the child as sober as the sire. While sinful amusements are condemned, as they should be, let parents, teachers, and guardians of youth provide in their stead innocent pleasures, which shall not taint or corrupt the morals. Do not bind down the young to rigid rules and restraints that will lead them to feel themselves oppressed and to break over and rush into paths of folly and destruction. With a firm, kindly, considerate hand, hold the lines of government, guiding and controlling their minds and purposes, yet so gently, so wisely, so lovingly, that they still will know that you have their best good in view. . . .

VII. The Emblem of the Evergreen

On Christmas, so soon to come, let not the parents take the position that an evergreen placed in the church for the amusement of the Sabbath-school scholars is a sin; for it may be made a great blessing. Keep before their minds benevolent objects. In no case should mere amusement be the object of these gatherings. While there may be some who will turn these occasions into seasons of careless levity, and whose minds will not receive the divine impress, to other minds and characters these seasons will be highly beneficial. I am fully satisfied that innocent substitutes can be devised for many gatherings that demoralize.

Christmas is coming. May you all have wisdom to make it a precious season. Let the older church members unite, heart and soul, with their children in this innocent amusement and recreation, in devising ways and means to show true respect to Jesus by bringing to him gifts and offerings. Let everyone remember the claims of God. His cause cannot go forward without your aid. Let the gifts you have usually bestowed upon one another be placed in the Lord’s treasury. . . . In every church let your smaller offerings be placed upon your Christmas tree. Let the precious emblem, “evergreen,” suggest the holy work of God and his beneficence to us; and the loving heart-work will be to save other souls who are in darkness. Let your works be in accordance with your faith. . . .

Let there be recorded in the heavenly books such a Christmas as has never yet been seen, because of the donations which shall be given for the sustaining of the work of God and the upbuilding of his kingdom.—Review and HeraId, Dec. 9, 1884.

The holiday season is fast approaching with its interchange of gifts, and old and young are intently studying what they can bestow upon their friends as a token of affectionate remembrance. It is pleasant to receive a gift, however small, from those we love. It is an assurance that we are not forgotten, and seems to bind us to them a little closer.

Brethren and sisters, while you are devising gifts for one another, I would remind you of our heavenly Friend, lest you should be unmindful of his claims. Will he not be pleased if we show that we have not forgotten him? Jesus, the Prince of Life, gave all to bring salvation within our reach. . . .

It is through Christ that we receive every blessing. . . . Shall not our heavenly Benefactor share in the tokens of our gratitude and love? Come, brethren and sisters, come with your children, even the babes in your arms, and bring your offerings to God according to your ability. Make melody to him in your hearts, and let his praise be upon your lips. . . .

While urging upon all the duty of first bringing their offerings to God, I would not wholly condemn the practice of making Christmas and New Years gifts to our friends. It is right to bestow upon one another tokens of love and remembrance if we do not in this forget God, our best friend. We should make our gifts such as will prove a real benefit to the receiver.- Review and Herald, Dec. 26, 1882.

Editor’s Note: We apologize for not publishing this earlier, but we expect to republish this in early November of next year – just as a reminder.

Please confine your comments to the subject of this post. Comments regarding the pagan origins of Christmas will not be published. Cancel reply