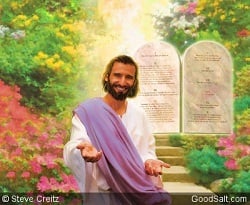 Seventh-day Adventists have traditionally looked at the Sabbath from the standpoint of law that reflects back on creation. This is derived from the commandment itself, “For in six days the LORD made the heavens and the earth, the sea, and all that is in them, and rested the seventh day” (Ex 20:11 NKJV). So we see in it a command to rest on the seventh day of the week because God did (Gen 2:1-3).1

Seeing the Sabbath as a memorial of creation is vital today as evolution is eroding so much faith in the reliability of Scripture. For instance, not only does evolution do away with God, but its theory of long ages destroys the credibility of the creation story, the basis of our relationship with God and our accountability to Him, which gives us reason for doing right. Evolution as the history of our origin also destroys our theology concerning the origin of sin and wipes away any purpose for our lives including a hopeful future in paradise.

Another way to look at this commandment is suggested in Deut. 5:15 NKJV, “And remember that you were a slave in the land of Egypt, and the LORD your God brought you out from there by a mighty hand and by an outstretched arm; therefore the LORD your God commanded you to keep the Sabbath day.” So, seeing the Sabbath by faith as a promise, we praise God for delivering us from the bondage of sin. As Jesus said, “Most assuredly, I say to you, whoever commits sin is a slave of sin” (John 8:34 NKJV) and “Therefore if the Son makes you free, you shall be free indeed” (John 8:36 NKJV).

It is vitally important that we see the exodus account (Deut 5) as a deliverance from an impossible situation. Not only that, but God delivered a nasty, insignificant bunch of people out of Egypt simply because He promised Abraham some 400 years previously that He would do so. We likewise have the same promise which will culminate in our mortal bodies putting on immortality.

The problem is that the ancient Israelites failed to keep God’s covenant by faith.  “. . . but Israel, pursuing the law of righteousness, has not attained to the law of righteousness. Why? Because they did not seek it by faith, but as it were, by the works of the law” (Rom 9:31-32 NKJV). They only saw it as a command to be kept in order to fulfill the requirements of the old covenant. Likewise many of us today do the same thing and in so doing so we tend to overlook the theological significance of the command and the promises implied in it.

Today different groups of Adventists throughout the world will keep the Sabbath in different ways, depending on their view of the commandment. And I believe that God honors the different ways of keeping the Sabbath if it is done in faith. However, when we “keep” Sabbath strictly as a legal command by focusing on all the do’s and don’ts, we may actually unknowingly be breaking the Sabbath, irrespective of how strictly we “keep” it, because we are not focused on the Lord of the Sabbath and what He has promised concerning it. In short we would not be keeping it in faith. Furthermore, a focus on what to do or not to do may completely destroy the Sabbath as a joy and a blessing as it did for many of the Jews in the time of Christ.

But perhaps even more important is that the Sabbath is also symbolic of the promised eternal rest. Hebrews seems to hint at this.

“For we who have believed do enter that rest, as He has said: ‘So I swore in My wrath,`They shall not enter My rest,’ although the works were finished from the foundation of the world. For He has spoken in a certain place of the seventh day in this way: ‘And God rested on the seventh day from all His works’” (Heb 4:3-4 NKJV). . . “again He designates a certain day, saying in David, ‘Today,’ after such a long time, as it has been said: ‘Today, if you will hear His voice, Do not harden your hearts.’ For if Joshua had given them rest, then He would not afterward have spoken of another day. There remains therefore a rest for the people of God. For he who has entered His rest has himself also ceased from his works as God did from His” (Heb 4:7-10 NKJV).

That the writer refers to creation and the Sabbath and yet said that Joshua spoke of another day is suggestive of something beyond the literal Sabbath day itself. Most theologians believe the writer of Hebrews is here speaking of the spiritual rest in Christ. Yet this earthly rest is also a foretaste of the heavenly rest to come. This can be seen metaphorically when we consider that it has been about 6000 years (six millenniums) since the creation of the earth so that we are about to enter the seventh millennium. Therefore in a sense just like the sacrifice of the lamb in the earthly sanctuary was symbolic of what was to come so the Sabbath is a symbol of the millennial rest we will have following the Second Advent.

If the seventh day Sabbath indeed points to a heavenly rest, we need to ask what our relationship should be to the seventh-day Sabbath. Historically we have been worked up over just how we should keep the Sabbath, which is important when considering it as a command of God. “Therefore the children of Israel shall keep the Sabbath, to observe the Sabbath throughout their generations as a perpetual covenant” (Ex 31:16 NKJV).

But we need to also realize that God designed the Sabbath for more than one purpose. It is intended to give us much-needed rest from six days of labor. Even our minds are to rest from worldly thoughts and focus on the Lord of the Sabbath. He asks us to remember that He created everything on the earth not in billions of years but in six short days and because He created us (Ex 20; Gen 2:1-3), we belong to Him. He also owns us because He has redeemed us as he redeemed Israel and brought them out of the slavery of Egypt (Deut 5). So we are doubly His. We may, therefore, by faith rest in the assurance of being adopted sons and daughters of the King of the universe.

We can also through Sabbath observance, by faith, look forward to the millennial rest and a place in heaven. And, “just as Abraham ‘believed God, and it was accounted to him for righteousness’ (Gal 3:6 NKJV) and “waited for the city which has foundations, whose builder and maker is God” (Heb 11:10 NKJV), we can look forward to our heavenly home. Abraham lived a nomadic life, and he knew what it was to be a stranger in a foreign land. He longed for that permanent place in heaven that God had promised. We sometimes get too comfortable in this sinful world, but the Sabbath should remind us that we are only strangers here and on our way to the promised heavenly home (John 14:2-3).

So how should we keep the Sabbath in this sinful world as we look forward to our promised inheritance which starts with the millennium?