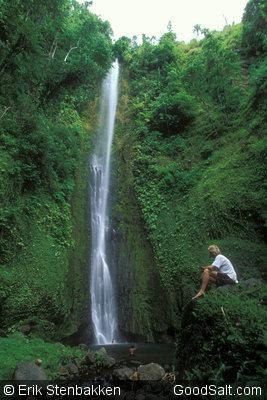 Jonathan:  “Dad, where are we going?”

Jonathan:  “What? Why aren’t we going to church?”

Father:  “We are, Jonathan. We’re going to church at the Johnsons’ today.”1

Jonathan:  “But why, Dad? Why aren’t we going to the same church where we’ve always gone?”

Father:  “It’s closed today, Son. They will be having services there tomorrow, on Sunday.”

Could such a scenario actually take place for Adventist believers? Believe it or not, this is the very situation now confronting many Seventh-day Adventist believers in the independent state of Samoa. How did such a state of affairs ever come about? Well, it all revolves around an imaginary boundary commonly known as the “international date line.”

What is the international date line, and how does it affect Sabbath keepers?

Of course, most people are aware that there is such a line, roughly following 180 degrees longitude, where on one side of the line it is considered to be one day, while on the other side it is already the next day. When you really stop and think about it, you realize that some such line, though necessarily arbitrary in nature, must exist somewhere on the globe if there is to be any kind of uniformity in determining what day it is at any given time and place.

Interestingly enough, there is not. The “line,” as we call it, is the result of the collective decisions of the various governmental jurisdictions of the world. There is sufficient agreement among these various entities to form a somewhat convoluted line, but which can nevertheless be drawn on a map.

What theory or convention is being followed, in order to achieve this degree of uniformity?

Well, I find that it is commonly believed, among both the religious and the secular, that Mesopotamia is the cradle of civilization. That’s also where the Garden of Eden is considered to have been. So, it would stand to reason that any date line should be somewhere close to halfway around the world from that location. However, the actual international convention for keeping time is a mean time based at an observatory in Greenwich, England. Apparently, this came about just because the English were the first to exert a sufficient global influence. This is what defines 180 degrees longitude, a line which the various governments may or may not follow exactly.

Sabbath keepers have generally not questioned such decisions made by government. However, things can get interesting when one government or another decides to make a change. One could say that the people of any given country used to consider themselves to be in the Far West of the world, but now they will be in the Far East – or vice versa. Independent Samoa (as opposed to American Samoa) is not the first country to make such a change. Many such revisions have been made, from time to time, among the islands of the Pacific. At one time, the date line ran to the east of Alaska. Again, it once ran to the west of the Philippines. In 1892, Samoa made a change. In 2011, the government of independent Samoa decided to reverse the previous move.

All of this begs the question:  The Sabbath is holy time. Does any government really have the right to make a decision affecting the observance of God’s holy Sabbath day? We read the following in Genesis 2:3 (NKJV):

Then God blessed the seventh day and sanctified it, because in it He rested from all His work which God had created and made.

What is the meaning of the Sabbath blessing of Genesis 2:3?

Here, one is faced with a deeper question. In blessing the seventh day, was God infusing the day itself with a special quality, or was He rather promising to bless those who would observe the seventh day in obedience and sincerity of purpose? The former seems to be an appealing concept to many, but just how is one to picture this in one’s mind? Did this blessing commence in Mesopotamia, spreading at a uniform rate of speed around the circumference of the earth, until it bumped into itself at a line exactly equidistant from its origin? If this were the case, it seems to me that the Sabbath blessing could only be realized by celebrating the day according to an exact comparison of the distance from where one is to the longitude of where the Garden of Eden was, by going either eastward or westward.

What would be the implications of such an approach? Well, for one thing, all generally accepted ideas of what day it is, at any given location, would have to be ignored. From sunset to sunset, one would necessarily end up observing the Sabbath on what the general public is calling Friday, or Saturday, or Sunday! In addition, we Sabbath keepers would have to draw our own Sabbath-keeping “date line,” running straight north and south, and dividing continents, countries, states or provinces, and perhaps even local communities. I write from British Columbia, and I realize that this line would necessarily run somewhere between here and Alaska. Can anyone really believe that this is the way God wants us to honour His holy day? The world would think we were crazy!

Therefore, I cannot escape the conclusion that the promised Sabbath blessing is bestowed on the basis of our willingness to obey and our sincerity of purpose. Hence, I believe that we need to follow the principles of Romans 13, going along with the government as long as they are not asking us to do anything wrong. In a location roughly halfway around the world from the cradle of civilization, could anyone seriously suggest that there are any moral implications (of right and wrong) involved in the decision of whether to consider one’s country to be in the Far West verses the Far East? I think not.

So, what has actually happened in Samoa, anyway? Following Thursday, December 29, 2011, the independent state of Samoa skipped Friday the 30th and moved directly into Saturday, December 31. The result is that, in this location, what would have been called Saturday, had the change not been enacted, will now be called Sunday. The Samoan government has cited a number of economic and logistical reasons for making the change, but it seems to have thrown the local Sabbath keepers into confusion.

The Seventh-day Adventist church in independent Samoa is administered by the Samoa-Tokelau Mission. The Mission administration, after considering the matter, had decided to begin observing Sunday (from sunset to sunset, of course) as the Sabbath. Their stated purpose was to continue observing every seventh day as the Sabbath, regardless of what the general public might call it.  According to one news article, Samoan S.D.A. ministers were brought in from other countries.2 These visiting ministers made a presentation, advising the Samoa Mission administration against the decision which they had made – but to no avail. The local leaders were well-intentioned, no doubt, but they could not be persuaded to change their purpose.

The leadership of the Samatau S.D.A. church has decided to continue observing Saturday as the Sabbath. Within the rest of the Samoa Mission, on the other hand, there are many families and individuals who cannot conscientiously go along with the decision of the church leadership to observe what is now Sunday. Thus, confusion has been the result.

It has been urged by some that there may be cultural issues involved, of which we may be unaware. It has been said that this problem needs to be sorted out locally. I can certainly agree that a local solution would be ideal, and I share the hope that this will be achieved over time. Meanwhile, can we leave our Samoan brothers and sisters, who find that they cannot go along with the decision of their church leaders, to struggle along as best they can without any indication of support from the rest of us in the world church?

————————
This post was edited on 2 February, 2012 to correct two factual errors regarding the Samatau SDA Church.