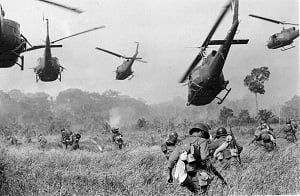 From the middle of 1970 to the middle of 1971, along with tens of thousands of other young men from my generation, I was a soldier participating in the Vietnam War. This war was the last war the United States was involved in with a conscription-based military. Faced with an unpopular war, the country nonetheless reached out and drafted the unwilling to leave their homes and families to shed blood and give their lives in a foreign country for what some in Washington, D.C. felt was a noble political purpose. No critical resources were at stake. The battle was against communism, a political ideology. Sadly, even though almost sixty thousand Americans gave their lives, The United States eventually demonstrated they were less committed to the war than the communists. American withdrawal from the conflict in 1974 – 1975 set the stage for the collapse of the South Vietnamese government and the country became and still is communist.

As a young Seventh-day Adventist, I was trained as a medic and had the charge of doing what I could, based on my area of assignment, to support the mission of keeping as many of the wounded alive as possible. The patients I cared for were usually South Vietnamese or American soldiers, but also included soldiers from Thailand, Australia, and South Korea as well as Vietnamese civilians. I even assisted with the care of North Vietnamese and Vietcong soldiers in a prisoner-of-war (POW) compound. One thing I discovered was that were it not for the umbrella of political ideology that overshadowed each of us, we might have been friends. We were mostly in our teens and twenties with most of our lives ahead of us. I learned enough of the Vietnamese language that I was able to converse a little with the prisoners and discovered they had dreams and aspirations also. One young man I remember wanted to be an artist, but the communist government of the north had conscripted him. He showed me some of his drawings. He was very talented. After I was no longer working at the POW camp, I heard that he had been tortured and executed by the South Vietnamese military.

War is a critical assault on our sense of decency and morality. The average soldier feels powerless to stop the atrocities going on around them. The shock and violence can destabilize the strongest person unless they manage to construct a defense against it. I felt it necessary to form a wall around my heart in order to survive. I remember one incident in particular. I was assigned to an evacuation hospital. A tall Texan who had lost both arms and legs in battle was slowly bleeding to death. Since the damage was too great, nothing could be done to save him. The doctors and nurses moved his hospital bed over to a corner of the room to die. As the lowest ranking staff member there, I was ordered to attend him until he passed away. As I stood next to him on a floor sticky with his blood, I listened as he told me of his wife and kids back in Texas. I tried hard not to be overwhelmed by the situation, but tears ran down my cheeks as I thought of the horrible loss this family had to face. The young man who lay dying was selfless in his love for them. But for our country’s undeclared war, he would have been home with them.

Every soldier faced with this and many other situations must find a means for coping. In the 1987 movie, “Hamburger Hill,” the soldiers repeatedly said the phrase “Don’t mean nothing!” when faced with similar events. It was their attempt to cope. Even with these coping mechanisms, it might take years for a soldier to resume relating to the world around him in a more-or-less normal manner. Some never can. Some develop Post-traumatic Stress Disorder or PTSD. One can never completely forget the images, sounds and smells they were exposed to in the past. For some those continuing memories are just as overwhelming as they were originally, even to the extent of disconnecting the individual from present reality. For these the war never ended.

At this point, some might be thinking that becoming a pacifist is the answer. That if people and governments eschew war, then all will be well. However, mankind has been in a state of war for the entire span of human history. That war began in heaven. God, Creator of all life and Ruler of the universe, was challenged for supremacy by one of the creatures he had created. Lucifer, a mighty covering cherub, rose up in rebellion against God and managed to convince a third of the angels to rise up with him. You can read about the war and the issues involved in Ezekiel 28 and Revelation 12. Lucifer, who is also called the Serpent, Dragon or Devil had no small army. Based on calculations from Revelation 5:11, Satan’s army must have numbered at least in the millions. But, as the Bible tells us in Revelation 12, he did not have the strength to prevail. Instead he was cast to the earth.

Once here, he recruited humanity to join him in the war against God. By convincing Adam and Eve to eat from the Tree of Knowledge of Good and Evil, he transferred their allegiance from their Creator to him. (See Genesis 3) No doubt he would have loved for his new recruits to have access to the Tree of Life so that they could be immortal soldiers, but God prevented that. Having lost humanity to Satan, God was unwilling to give up on them. Instead, he provided a means for them to defect back to their Creator. Some in every age have chosen to do just that. Abel was one of those, but the actions of his brother Cain show that the Devil’s host will do almost anything to prevent that. What a horror it must have been for Adam and Eve to have one of their sons destroy the other. Anyone who has lost a child to violence can understand the pain. How often they must have asked themselves if they were only there at the time could they have saved their child’s life.

This is only one example, a reminder, that in spite of any desire we may have to spiritualize the conflict we are in, it is a real war with real casualties. Behind many front doors are families and individuals dealing with loss, pain and devastation. Whether a loved one has died, or struggles with an incurable chronic disease, these are the result of war. Sometimes the war is openly waged in our families with verbal and even physical assaults that leave lasting psychological damage. Sometimes like Abel and Cain, family members even mame or kill one another.

We have been at war in this manner for so long, we hardly know what is normal anymore. We have surrounded ourselves with ways to defend our tender hearts from the damage. We accumulate things we don’t need because we tell ourselves if we just have this item or that, we can finally feel at peace. We shut out others because we have been deceived and hurt so many times that we fear what one more deception might bring. Those who have the means insulate themselves in media cocoons where they can play games, watch movies and participate in virtual socializing without ever risking stepping across their front-door threshold into the field of conflict. It is an interesting paradox that many of those games and movies themselves are based on conflict and violence, and those who think social media are passive have never met an online “troll.”

In spite of the raging, ongoing warfare, there is an answer: defect. Go over to the other side. It really is better there. The Devil would have us to believe that we have been on his side too long and done too many things for us to be welcome “over there.” Nothing is further from the truth. To understand that, we must understand that in addition to commanding the rebel forces against God, the Devil is also the inventor of the lie. (See John 8:44) This is how he was able to build such a following among the angels. No one had ever heard a lie before. Why would they not believe a lie when they heard it? But now that we know this, it makes sense not to trust the Devil when he tells us there is no hope for us anymore.

It is true that defecting is not easy. It may be the hardest thing anyone can do. We must first recognize that we are wrong. Most of us don’t like to do that. In fact, we like to build elaborate arguments proving the opposite. But if we can cross that bridge, God assures us that we will be welcomed. John tells us “If we confess our sins, he is faithful and just and will forgive us our sins and purify us from all unrighteousness.” 1 John 1:9, NIV This is a wonderful message. It tells us that not only will God willingly receive us, but He will also begin healing us. He will replace that wall of defense we have constructed with a much more effective means of dealing with the ongoing warfare.

Unlike the experience of the South Vietnamese at the end of the Vietnam War, God will not pull out and leave us hanging, defenseless before a cruel foe. As King David wrote, “The angel of the Lord encamps around those who fear him, and he delivers them. Taste and see that the Lord is good; blessed is the one who takes refuge in him.” Psalm 34:7-8, NIV  If we have no choice but to be in this war, perhaps we should make sure we are on the right side.