↓
Home→Beliefs About the Body of Christ→Church - Fundamental Belief 12→Servanthood: Our Christian Calling

We love titles, even in Christian circles. Whether it is Pastor, President, Professor, or Pope, titles are common currency in the church’s vocabulary. Inherent within some of those titles is the concept of hierarchy, authority and very often, privilege. The obvious or unseen but well-known underbelly of titles is church politics.

A classic example of church and politics is the church of Rome. According to the Vatican yearbook the Pope has nine titles: “Bishop of Rome, Vicar of Jesus Christ, Successor of the Prince of the Apostles, Supreme Pontiff (Pontifex Maximus) of the Universal Church, Primate of Italy, Archbishop and Metropolitan of the Roman Province, Sovereign of the State of the Vatican City, Servant of the Servants of God.” (Incidentally, Pontifex Maximus was originally the high priest of the pagan mystery religion of Rome. It was held by the Roman Emperor himself as the chief priest of the Roman State Cult.) 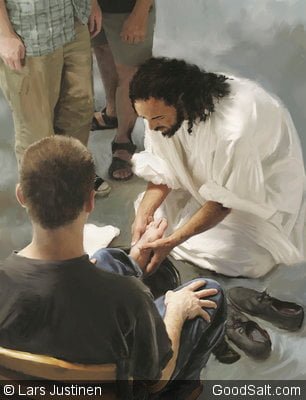 In stark contrast to all of that is the Apostle Paul’s favourite title,  “Paul a servant of Christ Jesus, called to be an apostle” (Romans 1:1).

Servant (diakonos) is a key word in the NT which nails down our calling and status as Christians and indeed is one of the biblical titles, par excellence, which all followers (disciples) of Jesus Christ, ought to carry with humility and dignity, not just as deacons and “deaconesses.” There is no Greek equivalent word for “deaconesses” in the New Testament since diakonos is both a masculine and a feminine noun.

Diakonos occurs 31 times in 29 verses in the Greek concordance of the KJV. It means someone who executes the commands of another, esp. of a master, a servant, attendant, minister – men and women alike.

In our church usage a deacon or “deaconess” carries out a number of duties and responsibilities assigned to him or to her by the laying on of hands. Those are listed in our latest church manual (2010 edition, pp 76 – 79).

In Acts 6 we read that seven men were set apart by the laying on of hands. I am intentionally avoiding the use of the word “ordination,” as there is no original word for “ordination” in the original languages of the New Testament.

The most important qualification of those seven men was being Holy Spirit-filled and having a good reputation within the church community. They were the crop of the crème spiritually speaking. Two of them went on to serve in amazing ways, Stephen and Phillip.

In Acts 7 we read of Stephen’s first and last sermon. He didn’t mince his words. He was not a crowd or congregation pleaser. No prosperity gospel, feel-good factor preacher. He was such a spirit-filled preacher that he drew a large crowd who, instead of saying  a loud “Amen” at the end of his powerful sermon, took him outside the city and stoned him to death.

One sermon and you are dead! Stephen’s servanthood came to an abrupt end, but his reward will never end.

His brief stint as a preacher shaped the ministry of the Apostle Paul. Let’s never underestimate the impact  a spirit-filled servant of the Lord – yes, a church member, a deacon turned evangelist – can make.

In Acts 8 we learn of Philip. He traveled up to Samaria and planted at least one church there. He was such a faithful servant of the Lord Jesus that God chose him to convert AND baptize an important Ethiopian official. An “ordinary” church member, a deacon, turned evangelist and soul winner, who baptizes. There are many scholars who believe this Ethiopian may have influenced the spread of Christianity in Africa.

Servanthood is what the church, its vitality, its growth, and its modus operandi  to carry out its mission to the world is all about. How beautifully this is illustrated and evidenced in the lives of New Testament deacons and deaconesses, the servants of Jesus Christ.

Servanthood in Our Time

Servanthood as exemplified by Paul and by Jesus Himself, when he knelt down and washed His disciples’ feet, is what makes the church of the living God the uniquely effective and vibrant Body of Christ.

When I went to SFTS (San Francisco Theological Seminary) in California to study for my D.Min., it took me a little while to get used to the seminary’s culture where they lived Paul’s words in a very practical way “… there is neither Jew, nor Greek, there is neither slave nor free, there is neither male and female, for you are all one in Christ Jesus” (Galatians 3:28).

We were all on same first-name basis – president, professors, office staff and students.  Men and women pastors and lecturers functioned as equals, serving one another. Quite a few of them were eminent scholars and theologians in their own rights who authored text books, wrote in encyclopedias and had doctorates from prestigious universities such as Harvard and Oxford.

Where this simple but beautiful spirit of equality prevails, that of servanthood thrives. We cannot afford to struggle with the dissonance of being servants of Jesus Christ and yet expect or even crave to be addressed by our respective titles.

Wherever I have served my church in different parts of the world, in any capacity, I have consistently asked to be called by my first name. There were times I was introduced as, “Pastor, Dr, President.” I would then stand, thank the brother or sister for their kind words of welcome and introduction and state that I preferred to be addressed by my first name only.

When nominating time comes around and the church elects its “officers,” at any level of the church organization, we would do well to remember that what we often call church office, with its respective titles, is actually a ministry gifted to us by the Holy Spirit, recognized and acknowledged by the church.

More importantly, no ministry is higher or more prestigious than another. At the foot of the cross where we all take our various mantles of servant leadership the ground is level.

The General Conference Presidency is not more important in God’s eyes than the servant ministry of the little old sister who visits her neighbour once a week to give her a Bible study in her home or takes her a loaf or freshly baked bread to show God’s love in her time of need.

If we fully embrace the biblical title of servants of Jesus Christ, at least three things will happen – we will eliminate politics, or power struggles, in our midst, we will rejoice and prayerfully support those who are asked to be servant leaders in any capacity, paid or unpaid, and we will make an impact on our world as was the case for servants Stephen, Philip, Paul, and others.