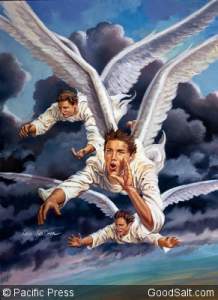 And there followed another angel, saying, Babylon is fallen, is fallen, that great city, because she made all nations drink of the wine of the wrath of her fornication. Revelation 14:8 [1.Image © Pacific Press from GoodSalt.com]

Many say that Babylon means confusion. Well it may, but it is not so much confusion about certain doctrines as much as it is about the gospel itself. When legalism mixes our works with God’s grace, it gets confusing. In Galatians 2:20 Paul gives us the pure gospel when he says, “Not I but Christ.” So many of us want to make it a combination of me plus Christ. Problem is, any time I make “me” a part of the gospel I have a corrupt gospel because “me” is corrupt. Does this mean doing away with good works? Not at all! It just means realizing that it is God who is working in us and not us. Philippians 2:13

Seventh-day Adventists teach that Babylon is a religious system which it is, but it is more than that. It is an attitude – an attitude that can be found in any system. Babylon is the attitude that I can save myself by my own works. It began with the tower of Babel.

Babel meaning “gate” and El meaning “God.” At the tower of Babel man decided they could work and build their own way to heaven. They did not think they could trust God to save them from another flood so they decided to build a tower and by their works save themselves. Thus Babylon symbolizes salvation by our own works, or legalism. Cain had the attitude of Babylon when he brought the works of his field and offered his own system of worship. But God could only accept Abel’s sacrifice – a lamb which pointed to the Lamb of God who could only save. Since then man has been presenting his own system of worship and even day of worship thinking he can save himself by inventing his own religion instead of accepting the gospel.

Years later Daniel 1 tells us that God gave Jerusalem into Nebuchadnezzar’s hands, but in Daniel 4 Nebuchadnezzar says “is this not Babylon which I have made?” And God says, “No! I made it and gave it to you.” But here is the attitude of Babylon again – that it is my works that save me.

During the Dark Ages people were taught that their works would save them. They could buy and work their way to heaven. They were also given a work day to worship instead of the Sabbath day of rest. So they were like Cain, worshiping their works instead of our Creator and Redeemer. When the everlasting gospel is proclaimed in all its glory, Babylon will fall! Man will see that we are not saved by our own religious works and inventions but rather are saved by the grace of God alone!

The third angel’s message assures us of the victory of grace over the legalism of Babylon.

Revelation 14:9-12 And the third angel followed them, saying with a loud voice, If any man worship the beast and his image, and receive [his] mark in his forehead, or in his hand, The same shall drink of the wine of the wrath of God, which is poured out without mixture into the cup of his indignation; and he shall be tormented with fire and brimstone in the presence of the holy angels, and in the presence of the Lamb: And the smoke of their torment ascendeth up for ever and ever: and they have no rest day nor night, who worship the beast and his image, and whosoever receiveth the mark of his name. Here is the patience of the saints: here [are] they that keep the commandments of God, and the faith of Jesus.

It is very important to notice that the ones who accept the mark and are trying to be saved by their works are rejecting the cross of Christ. The “cup of His indignation” is the cup that Jesus asked to be passed from Him, in Gethsemane. However, He drank that cup for us, at Calvary. Those who reject the seal of God, and the Sabbath are really rejecting the cross. They say, “I will accept the mark of the beast and provide my own salvation.” When they do this they reject the Salvation provided at Calvary, and instead of letting Jesus drink that cup for them, they must drink it themselves!

After all, if you do not trust Jesus enough to provide your daily bread, but rather accept the mark so that you can do business and put bread on the table yourself, how can you trust Him to provide for your eternal salvation? On the other hand, by rejecting the mark (works) and keeping the Sabbath and seal of God we are accepting the cross and justification by faith. Jesus drinks the cup mentioned in the third angel’s message so we don’t have to! We can all exclaim with Abraham at Moriah, “Jehovahjireh” My Lord Will provide!”

The third angel’s message is the climax of the battle between faith and works. For centuries man has been taught by tradition to save himself by worshiping a man made religion and even a man made Sabbath which is Sunday. Those who put their faith in Jesus triumph over the legalism of man made religions as they rest their faith in the One who gave all to save them. They cherish His Sabbath which is a sign that we are not saved by works but rather by His amazing grace!`