↓
Home→Daily→Thursday: The Fall of Babylon

Whatever his faults, Belshazzar is a man of his word. So, despite the bad news, he is satisfied with the interpretation given by Daniel, which is why he bestows upon the prophet the promised gifts. 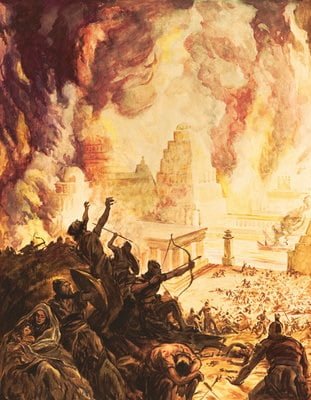 It appears that by admitting the truth of Daniel’s message, the king implicitly recognizes the reality of Daniel’s God. Interestingly, Daniel now accepts the gifts he has refused before, probably because such gifts can no longer influence his interpretation. Besides, at that point such gifts are meaningless since the empire is about to fall. Thus, probably as a matter of courtesy, the prophet accepts the rewards, knowing all the while that he will be the third ruler of the kingdom for only a few hours.

Exactly as announced by the prophet, Babylon falls. And it does so quickly; while the king and his courtiers drink, the city falls without a battle. According to the historian Herodotus, the Persians dug a canal to divert the Euphrates River and marched into the city on the riverbed. That same night Belshazzar is slain. His father, King Nabonidus, has left the city already, surrendering himself later to the new rulers. Thus, the greatest empire humanity has ever known to this point comes to an end. Babylon, the head of gold, is no more.

“Belshazzar had been given many opportunities for knowing and doing the will of God. He had seen his grandfather Nebuchadnezzar banished from the society of men. He had seen the intellect in which the proud monarch gloried taken away by the One who gave it. He had seen the king driven from his kingdom, and made the companion of the beasts of the field. But Belshazzar‘s love of amusement and self-glorification effaced the lessons he should never have forgotten; and he committed sins similar to those that brought signal judgments on Nebuchadnezzar. He wasted the opportunities graciously granted him, neglecting to use the opportunities within his reach for becoming acquainted with truth”. — Ellen G. White, Bible Echo, April 25, 1898.