Read Genesis 18:16-19, Genesis 18:29. How does Abraham’s prophetic ministry affect his responsibility toward Lot?

Abraham has just been reconfirmed in God’s promise of a son. Yet, instead of enjoying the good news, he engages God in a passionate discussion about the fate of Lot in Sodom. Abraham is not only a prophet to whom God reveals His will; he is also a prophet who intercedes on behalf of the wicked. The Hebrew phrase “stood before the LORD” (Genesis 18:22, NKJV) is an idiom for praying. 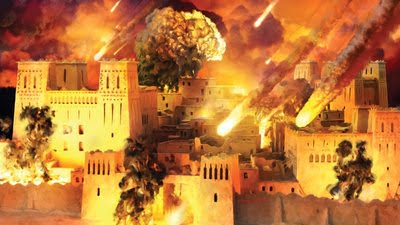 In fact, Abraham challenges God and bargains with Him to save Sodom, where his nephew resides. Moving from 50 down to 10, God would have saved the people of Sodom if only 10 Sodomites had been righteous.

Of course, when one reads the story of what happened when the two angels came to Lot to warn him of what was coming (Genesis 19:1-10), we can see just how sick and evil the people had become. It truly was a wicked place, as were many of the nations around them; one reason why, eventually, they were driven from the land (see Genesis 15:16).

“And now the last night of Sodom was approaching. Already the clouds of vengeance cast their shadows over the devoted city. But men perceived it not. While angels drew near on their mission of destruction, men were dreaming of prosperity and pleasure. The last day was like every other that had come and gone. Evening fell upon a scene of loveliness and security. A landscape of unrivaled beauty was bathed in the rays of the declining sun. The coolness of eventide had called forth the inhabitants of the city, and the pleasure-seeking throngs were passing to and fro, intent upon the enjoyment of the hour.” — Ellen G. White, Patriarchs and Prophets, Pages 157, 158.

In the end, God saved only Lot, his wife, and his two daughters (Genesis 19:15), almost half the minimum of 10. The sons-in-law, who did not take Lot’s warning seriously, remained in the city (Genesis 19:14).