↓
Home→Daily→Thursday: The Restoration of Unity

Why is reconciliation with an offended brother a prerequisite for acceptable worship? See Matt. 5:23-24. 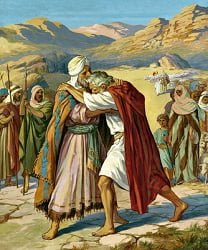 There were different kinds of offerings brought to the altar, but Jesus was probably referring to an animal sacrificed so the sinner could receive divine forgiveness. Before we can obtain God’s pardon, however, we must make things right with others. Reconciliation requires a humble recognition of our faults. Without this attitude, how could we ask for God’s forgiveness?

Ideally, the private conversation will lead to repentance and reconciliation. However, if the offender does not admit his (or her) wrongdoing, nor is he (or she) willing to make things right, the next recourse is to take one or two witnesses (Deut. 19:15) in an effort to persuade the erring person. They should not be personally involved in the situation in order to be in a better position to call him (or her) to repentance. If the offender refuses to hear their counsel, they can bear witness to the efforts that have been made on his (or her) behalf.

Finally, and only if the first two attempts have failed, we should tell it to the church -not yet for a disciplinary action but for an ultimate appeal to lead to repentance. From the beginning, the whole process has a redemptive goal (Gal. 6:1).

We should remember that redemption is the best way to bring healing for everyone involved in a dispute. When someone has hurt us, why do we so often not follow the procedure that Jesus gave? How can we learn to not let a desire for revenge cloud our thinking?